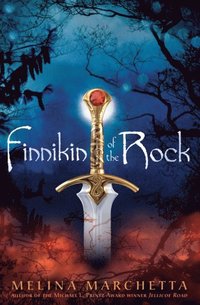 Finnikin of the Rock E-bok

av Melina Marchetta
E-bok (EPUB - DRM), Engelska, 2013-09-05
61
Ladda ned
Spara som favorit
Laddas ned direkt
Läs i vår app för iPhone och iPad
&quoteFilled with questions about the impact of exile and the human need to belong, this standout fantasy reveals that its real magic lies in its writing.&quote - Booklist (starred review)Finnikin was a child when the royal family of Lumatere was brutally murdered and an imposter seized the throne. Now a curse binds all who remain, and those who escaped roam surrounding lands persecuted, sick, and despairing. A boy on the cusp of manhood, Finnikin is compelled to join forces with a young novice named Evanjalin, who claims that her dreams will lead the exiles to a surviving royal child and a way to regain Lumatere. But her behavior suggests she is not what she seems - and the startling truth will test Finnikin's faith in everything he knows. In a narrative that crackles like a coming storm, Printz Award-winner Melina Marchetta crafts an epic fantasy that rivets from the first page.
Visa hela texten