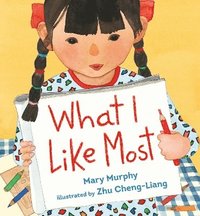 av Mary Murphy
Inbunden Engelska, 2019-10-03
150
Köp
Spara som favorit
Skickas inom 5-8 vardagar.
Gratis frakt inom Sverige över 159 kr för privatpersoner.
Finns även som
Visa alla 2 format & utgåvor
What I like most is this pencil. It is red outside and red inside. Its colour comes out like a red ribbon. It's what I like most in the world. Except for... A little girl tells us about all her favourite things, from her light-up shoes, to hot, steamy chips, to her red pencil. But the girl knows that, even as her feet grow, her plate empties, and her pencil shortens, there's something she'll always love ... and that is what she likes the very, very most. An intimate ode to the unwavering love a child has for their mother, this tender, lyrical story is brought exquisitely to life by Zhu Cheng-Liang, a recipient of a New York Times Best Illustrated Book Award.
Visa hela texten

Mary Murphy excels at writing cosy, sweet books which have a hug at their heart, and it's wonderful to see a Chinese mum and daughter portrayed, too. * BookTrust * The chorus perfectly evokes the circular nature of the child's imagination, while Zhu Cheng-Liang's striking, romantic paintings are full of amusing detail. * The Irish Times - Christmas Books Round-Up * A gentle, profound book about love - don't miss it. * The Irish Independent, Children's Books of the Year * Zhu Cheng-Liang's pencil and watercolour drawings complement Murphy's words beautifully. * The Irish Independent, Top Picks from Elaina Ryan * An intimate ode to the unwavering love a child has for their mother, this tender, lyrical story is brought exquisitely to life by Zhu Cheng-Liang. * Parent Talk *

Mary Murphy, renowned for her fresh, bold artwork and warm, colourful graphics, has written and illustrated many picture books, including How Kind!, Little Owl and the Star, I Kissed the Baby and Utterly Lovely One. Her novelty title, A Kiss Like This, was shortlisted for the Irish Bisto Book of the Year Award and its sequels, Say Hello Like This! and Good Night Like This, were met to great critical acclaim. Mary has also written two novelty titles, Crocopotamus and Picken - and many Walker Baby board books, including Mouse is Small, Quick Duck, Slow Snail and Are You My Mummy? Mary lives in Dublin, Ireland. Find her online at marymurphy.ie. Zhu Cheng-Liang is a Chinese illustrator who has been making books for over 40 years. He has over 50 picture books to his name, many of which have been received to both national and international acclaim. They include The Sparkling Rabbit-Shaped Lamp, which received an Honorable Mention by UNESCO's Noma Concours for Children's Picture Book Illustrations and A New Year's Reunion, which won the Feng Zikai Children's Book Award and a New York Times Best Illustrated Book Award. Born in Shanghai, he now lives in Nanjing.