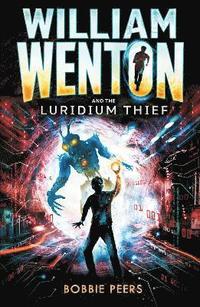 av Author Bobbie Peers
Häftad Engelska, 2017-04-06
101
Köp
Spara som favorit
Skickas inom 5-8 vardagar.
Gratis frakt inom Sverige över 159 kr för privatpersoner.
Finns även som
Visa alla 2 format & utgåvor
A new fantasy-adventure series packed with addictive genre hooks for 9+ readers: code-breaking, cyber-technology, killer robots and a boy hero with a supernatural destiny. Perfect for fans of Percy Jackson, Alex Rider and Dr Who. Packed full of magical code-breaking skills, wisecracking robots and a young hero who might just be too clever for his own good, this tech-savvy adventure is perfect for fans of Percy Jackson and Alex Rider. Twelve year-old code breaking genius William Wenton, is trying to make sense of his family's dramatic escape from their home in London. But when his extraordinary talent for cracking codes is suddenly revealed, William must face the danger that has been lurking around him for years.
Visa hela texten

William Wenton and the Luridium Thief cracks the code for great adventure. Mystery, action, a great hero and fantastic robots - what more could you ask for? -Shane Hegarty, author of Darkmouth -- Shane Hegarty, author of Darkmouth * Shane Hegarty, author of Darkmouth * Alex Rider-level thrills and a host of amazing gadgets, many of them animate, give this the page-turner prize and it's definitely a case of brains over brawn. April 2017 Debut of the Month * LoveReading, Andrea Reece * [...] a pacey code-breaking'n'cyborgs thriller that shirks conventions [...] The climactic showdown in this inventive, soon-to-be-filmed tale comes in a wartime-era cryogenic lab hidden in disused London tube tunnels. * Observer * "This is a fast-paced, highly imaginative debut that is the start of a new series. It's a real page-turner with very short chapters. In Norway, author Bobbie Peers is an award-winning film director and scriptwriter. The book won the Norwegian Ark Children's Award and Children's Book Award and has already been translated into 30 different languages - definitely a new series to watch." * BookTrust * "The first in a thrilling new fantasy-adventure series taking the world by storm [...]" * Parent Talk *

Bobbie Peers made his mark on Norwegian film history when he won a Palme d'Or in 2006 for Sniffer, written and directed by Peers himself. The award became the first of many milestones in the London International Film School graduate's career as a director and film writer. William Wenton and the Luridium Thief is the first book in the William Wenton series.