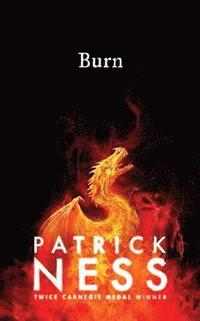 av Patrick Ness
Inbunden Engelska, 2020-05-07
169
Köp
Spara som favorit
Finns även som
Visa alla 7 format & utgåvor
An all-consuming story of revenge, redemption and dragons from the twice Carnegie Medal-winner Patrick Ness. "On a cold Sunday evening in early 1957, Sarah Dewhurst waited with her father in the parking lot of the Chevron Gas Station for the dragon he'd hired to help on the farm." This dragon, Kazimir, has more to him than meets the eye. Sarah can't help but be curious about him, an animal who supposedly doesn't have a soul but is seemingly intent on keeping her safe from the brutal attentions of Deputy Sheriff Emmett Kelby. Kazimir knows something she doesn't. He has arrived at the farm because of a prophecy. A prophecy that involves a deadly assassin, a cult of dragon worshippers, two FBI agents - and somehow, Sarah Dewhurst herself. From the bestselling author of the Chaos Walking trilogy comes a heart-stopping story of fanaticism, hope, bravery and impossible second chances, set in a world on the very brink of its own destruction. "Exhilarating and heart-stopping." Russell T Davies "Gloriously original and unpredictable ... Mind-bending in the best possible way." Observer "A clever, complex and completely engrossing story." The Times "[An] extraordinary story of fate, power and redemption ... He is a remarkable talent." Daily Mail "Ness shows that although monsters exist in every world, many wish to overcome them; and even in the smoking ruins of civilisation, there is room for hope." Guardian "Revenge, redemption, the Cold War and dragons. Another great tale from the master with the best opening line of any book this year." Simon Mayo "You can always rely on Patrick Ness to surprise you, and this beautifully written urban fantasy doesn't disappoint ... an immersive, rewarding read." Independent "Never less than gripping ... full of charm, intriguing characters and awesome, cinematic set-pieces." SFX "An incredibly touching, powerful and startling read." Female First "A provocative Cold War-set tale of dragon worshippers, parenthood, and the apocalypse." Entertainment Weekly "Gripping until the end." Irish Times
Visa hela texten

Wonderful and mind-blowing and exhilarating and heart-stopping. What a storyteller! I loved it! * Russell T Davies * I'm completely gripped by this story of revenge, redemption and dragons from the double Carnegie Medal-winner. -- Fiona Noble * The Bookseller * A summer blockbuster of a novel: exciting, clever and moving. Somehow, Ness just keeps getting better. * Juno Dawson * Ness brilliantly juggles these multi-layered themes and twisting plot lines while creating a world where dragons are as richly imagined as humans and engage our emotions just as forcefully. He is a remarkable talent. -- Sally Morris * The Daily Mail * With two Carnegie medals to his name, Patrick Ness is a literary giant in young adult fiction, and his books remain gloriously original and unpredictable... Mind-bending in the best possible way. -- Fiona Noble * The Observer (The New Review) *

Patrick Ness is the award-winning and bestselling author of the Chaos Walking trilogy, A Monster Calls, More Than This, The Rest of Us Just Live Here, Release and And the Ocean Was Our Sky. John Green has described him as "an insanely beautiful writer". He has won every major prize in children's fiction, including the Carnegie Medal twice. He has written the screenplay for the film of A Monster Calls and the BBC Doctor Who spin-off, Class. The first Chaos Walking film is slated for release in 2020.