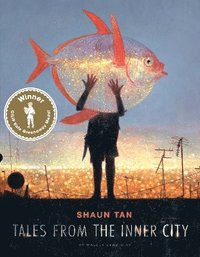 Tales from the Inner City

av Shaun Tan
Inbunden Engelska, 2018-10-04
219
Köp
Spara som favorit
Skickas inom 3-6 vardagar.
Fri frakt inom Sverige för privatpersoner.
Finns även som
Visa alla 1 format & utgåvor
A stunningly presented collection of twenty-five illustrated short stories exploring the relationship between humans and animals, from award-winning visual storyteller Shaun Tan. Where can we live if not in each other's shadow? World-renowned artist Shaun Tan applies his extraordinary talent to a reflection on the nature of humans and animals, and our urban co-existence. From crocodile to frog; tiger to bee, this is a dark and surreal exploration of the perennial love and destruction we feel and inflict - of how animals can save us, and how we are entwined, for better or for worse. Tales from the Inner City is a truly masterly work, bearing all of Shaun Tan's trademark wit and poignancy in both its prose and exquisite illustrations.
Visa hela texten

"When it comes to originality and genius, Tan is in a league of his own. This collection of stories and poems with an animal-in-the-city theme are intriguing, though-provoking and at times baffling, asking as many questions as they answer, and the illustrations are sublime. One for quirky teens (or adults) who love art." * The Irish Independent * "[...] it will transport and haunt anyone who is fascinated by the secret spaces of a city." * The Guardian *

Shaun Tan grew up in Perth and works as an artist, writer and film-maker in Melbourne, best known for illustrated books that deal with social, political and historical subjects through dream-like imagery. The Rabbits, The Red Tree, Tales from Outer Suburbia and the graphic novel The Arrival have been widely translated throughout the world and enjoyed by readers of all ages. Shaun has also worked as a theatre designer, a concept artist for Pixar and won an Academy Award for the short animated film The Lost Thing. In 2011 he received the prestigious Astrid Lindgren Memorial Award in Sweden, in recognition of his services to literature for young people. His most recent books are Rules of Summer and The Singing Bones.