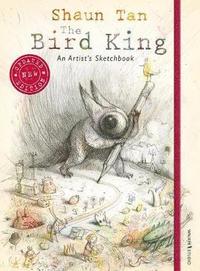 The Bird King: An Artist's Sketchbook

av Shaun Tan
(1 röst)
Inbunden Engelska, 2019-10-03
199
Köp
Spara som favorit
Award-winning artist Shaun Tan brings his story-making to life in this beautiful sketchbook, now with brand new content. A treasure trove of sketchbook pages, jottings, doodles and drawings from life reveal much about Shaun's personal style and themes in this inspiring collection. Extensive brand new content includes pencil sketches for upcoming books, development work for Eric and cover design ideas for Cicada, along with new oil paint landscape sketches and character studies. This is a must-have for any Shaun Tan fan, particularly art and illustration students, as well as any lover of story and the creative process.
Visa hela texten

The sharing of unfinished work is a generous gesture, and the collection is a treasure trove for any young artist who wants to know more about how ideas are captured on paper. * Publishers Weekly, starred review * Unmistakable are his flawless craftsmanship, his organically industrial yet timeless aesthetic, and his lyrically haunting style and tone... A powerful springboard for the imagination. * Booklist, starred review *

Shaun Tan grew up in Perth and works as an artist, writer and film-maker in Melbourne; he is best known for illustrated books that deal with social, political and historical subjects through dream-like imagery. The Rabbits, The Red Tree, Tales from Outer Suburbia and the graphic novel The Arrival have been widely translated throughout the world and enjoyed by readers of all ages. Shaun has also worked as a theatre designer, a concept artist for Pixar and won an Academy Award for the short animated film The Lost Thing. In 2011 he received the prestigious Astrid Lindgren Memorial Award in Sweden, in recognition of his services to literature for young people. His most recent books are Rules of Summer, The Singing Bones, Tales from the Inner City and Cicada.