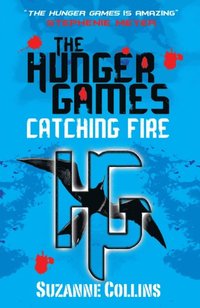 av Suzanne Collins
E-bok (EPUB - DRM), Engelska, 2011-05-03
106
Ladda ned
Spara som favorit
Laddas ned direkt
Läs i vår app för iPhone och iPad
Katniss survived the Hunger Games. Now the Capitol wants revenge. It's payback time, and her chance of survival is even slimmer than ever... After winning the brutal Hunger Games, Katniss and Peeta have returned to District 12, hoping for a peaceful future. But their victory has caused rebellion to break out - and the Capitol has decided that someone must pay. As Katniss and Peeta are forced to visit the other districts on the Capitol's Victory Tour, the stakes are higher than ever. Unless they can convince the world that they are still lost in their love for each other, the consequences will be horrifying. Then comes the cruellest twist: the contestants for the next Hunger Games are announced, and Katniss and Peeta are forced into the arena once more... &quoteCatching Fire not only lived up to my high expectations, it surpassed them. It's just as exciting as The Hunger Games, but even more gut wrenching, because you already know these characters, you've already suffered with them.&quote Stephenie Meyer &quoteBrimming with potent themes of morality, obedience, sacrifice, redemption, love, law, and, above all, survival.&quote Booklist
Visa hela texten