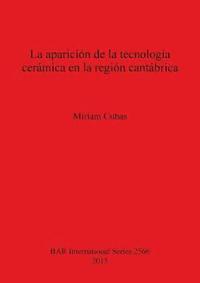 av Miriam Cubas
Häftad Engelska, 2013-11-15
599
Köp
Spara som favorit
Skickas inom 10-15 vardagar.
Fri frakt inom Sverige för privatpersoner.
The objective of this book is to analyse ceramic technology within the geographical context of the Cantabrian region (N Spain) during the fifth millennium cal BC. It analyses ceramics, understood as manufacture, as the result of a technological fabrication process, in relation to the principle of a ceramic manufacturing sequence, which covers a set of operations that transform a raw material into a product with certain physicochemical properties which practically eliminate its original characteristics. Interest in the prehistoric ceramics of the Cantabrian region is a relatively recent phenomenon and is tied to its importance as a cultural marker of the Neolithic Period. The primary references to these types of materials were used to defend the cultural attribution of certain regional contexts to this period. The scarcity of recognisable morphological and decorative features among the first ceramic groups has resulted in their study being relegated in favour of other types of ceramics, such as the Bell Beaker ones, whose morpho-stylistic characteristics permit the establishment of cultural and chronological systems. This current research is focused on analysing the ceramic groups ascribed to the fifth millennium cal BC from the Los Canes (Asturias), Los Gitanos (Cantabria) and Kobaederra (Vizcaya) sites. These sites constitute important sequences for the study of the Neolithisation processes in the region's western, central and eastern zones.
Visa hela texten