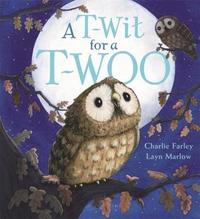 av Charlie Farley
Inbunden Engelska, 2018-04-05
3-6 år
159
Köp
Spara som favorit
Finns även som
Visa alla 2 format & utgåvor
A heartfelt story about friendship and the power of self-belief, perfect for sharing at bedtime. He'd fly every night through the wood that he loved, And quietly gaze at the stars up above. But something was missing that made him feel blue. When he sang in the moonlight ... he'd just say 'T-WOO!' Little owl Twoo feels like something is missing. His song is incomplete, a T-woo without a T-wit. So the brave little owl sets off in search of his true owl song - and a true friend to sing with him. On his journey, he discovers that when you believe in yourself, anything is possible. This feel-good rhyming picture book is perfect for fans of Giraffes Can't Dance and The Lion Inside.
Visa hela texten

Charlie Farley's A T-Wit for a T-Woo is a charming, gently humorous story about a tawny owl's search, perfect for sharing at bed-time. The rhyming text reads aloud beautifully and is complemented by Layn Marlow's delightful illustrations. * Julia Green * ...uplifting story which shows the importance of self-belief and not giving up. [...] The superbly atmospheric illustrations by Layn Marlow capture the beauty of the night woodland and bring us a superb cast of characters to love. * Parents in Touch * A lovely story about self-belief and the journey to discover your own identity. [...] The illustrations are a lovely evening palette making this a wonderful bedtime story! * BookBairn (on Instagram) * If you believe in yourself, anything is possible. That's the uplifting message behind A T-WIT FOR A T-WOO... * The Good Schools Guide *

Charlie Farley grew up by the sea in North-East Scotland, where he spent his days reading, writing and day-dreaming. Charlie has always been inspired by nature, and much of his writing is influenced by the landscape and animals of Dorset, where he lives with his wife, four children and two dogs. Layn Marlow gained a first class degree in Illustration from Southampton Solent University, and has been writing and illustrating picture books ever since. Layn's titles have sold over a million copies worldwide and been translated into more than 20 different languages. A Very Strange Creature was shortlisted for the Red House Book Award and Hurry Up and Slow Down won the Never Too Young Coventry Inspirations Book Award in 2010. Layn lives in Hampshire with her family.