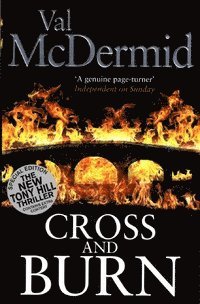 Guilt and grief have driven a wedge between long time crime-fighting partners psychologist Tony Hill and ex-DCI Carol Jordan. But just because they're not talking doesn't mean the killing stops. Someone is killing women. Women who bear a disturbing resemblance to Carol Jordan. And when the evidence begins to point in a disturbing direction, thinking the unthinkable seems the only possible answer. Cornered by events, Tony and Carol are forced to fight for themselves and each other as never before...
Visa hela texten

Val McDermid is a No.1 bestseller, translated into more than thirty languages, with over two million copies sold in the UK and over ten million worldwide. Val has won many awards internationally, including the CWA Gold Dagger for best crime novel of the year and the the Stonewall Writer of the Year Award. In 2011, Val was the recipient of the Pioneer Award at the 23rd Annual Lambda Literary Awards. In 2010, she was awarded the prestigious CWA Cartier Diamond Dagger. This followed her induction into the Hall of Fame at the ITV3 Crime Thriller Awards in 2009, the same year in which she was elected to an Honorary Fellowship at St Hilda's College, Oxford.