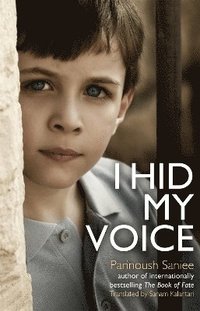 I Hid My Voice

av Parinoush Saniee
Häftad Engelska, 2017-03-23
102
Köp
Spara som favorit
Finns även som
Visa alla 1 format & utgåvor
This is the story, based on fact, of a boy who couldn't speak until the age of seven. Now twenty, he describes the events of his life. Four-year-old Shahaab has not started talking. The family doctor believes there is no cause for concern; nevertheless, Shahaab is ridiculed by others who call him 'dumb'. Young Shahaab doesn't understand what the word means and thinks it is a compliment, until one day his cousin plays a trick on him to prove to everyone that the boy truly is the neighbourhood idiot. When his mother recounts the incident to her husband, Shahaab is crushed to learn that his father also thinks the boy's speech impediment indicates that his son is an idiot and thus brings shame on the family. Shahaab soon recognizes that his father's love and esteem is concentrated on his older brother, Arash, and his younger sister, Shadee. In his innocent and deeply hurt child's mind, he begins to believe that the 'good' and 'intelligent' children like his older brother are their fathers' sons. On the other hand, children like him who are 'clumsy' and 'problematic' are their mothers' sons. From that moment on, his world, which he thought was filled with beauty and kindness, suddenly turns harsh, full of anger and insult. He begins to lash out, taking childish revenge on those around him, encouraged by his two imaginary friends, Esi and Bibi. No one in the family can understand Shahaab's wild behaviour except his maternal grandmother, who seems to possess the understanding and the kindness he so desperately craves. Their growing bond leads to a deep friendship in which Shahaab is able to experience some happiness and finally find his voice.
Visa hela texten

A fictive tale of an Iranian boy who is mute, it is also the story of women in Iran. Powerful, moving, and profoundly sad, it's a glimpse into a deeply foreign culture * Ottawa Magazine * The author's background can be sensed at every turn of the page, Saniee skilfully integrates concepts and theories about the psychology of the child and demonstrates how easy it is to cause, as parents, irremediable damages to a child, but also how easy it is not to cause them . . . it's a word of warning. Parinoush Saniee masters the art * The Cultural Supplement (Romania) * Gripping . . . an agonising childhood in the Iran of the ayatollahs, with its revolutionary committees and moral police always lurking * Stavanger Aftenblad (Norway) * A richly written novel with which Parinoush Saniee digs into the social texture of her country, Iran, and which, while telling the story of the struggles of a boy, portrays the life of women. Tight dialogue and a protagonist who becomes the symbol of hope in a better world * La Repubblica (Italy) * A deeply moving book * Dagbladet (Norway) * A new literary sensation. A child's untold words become a scream against heartlessness and indifference * Panorama (Italy) * A beautiful metaphor of the censorship that dominates her country * Culturas (Spain) * Finally, away from the roar and blare of heavily-hyped new publications, we find a low-key release which may well cause a ripple but deserves to make a splash. I Hid My Voice by the Iranian novelist Parinoush Saniee is a novel based on fact about a boy who couldn't speak until the age of seven. Now twenty, Shahaab looks back on his life and shares his ordeal. He is mocked by friends, shunned by his father and understood only by his grandmother who gradually helps him to find his voice again. Saniee's book shines a light on one child's helplessness and, by extension, everyday Iranians' inability to speak out. It is also proof that a book doesn't have to be a big-name blockbuster to be an immensely satisfying summer read * The National *

Parinoush Saniee is a sociologist and psychologist. She was formerly manager of the research department at the Supreme Coordination Council for Technical and Vocational Education in Iran. Her first novel, The Book of Fate, won the Boccaccio Prize in Italy, Euskadi de Plata Prize in the Basque Country, and was selected as one of World Literature Today's 75 Notable Translations of 2013. I Hid My Voice is her second novel that has been translated into English.