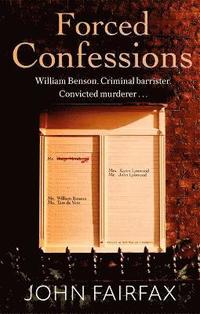 av John Fairfax
Inbunden Engelska, 2020-03-05
249
Köp
Spara som favorit
Finns även som
Visa alla 2 format & utgåvor
William Benson. Criminal barrister. Convicted murderer.... Convicted of murder sixteen years ago, William Benson is ostracised by the establishment and his family. Supported by a close-knit group including solicitor Tess de Vere, he's defied them all and opened his own Chambers. Now he faces the case of his life - and the terminal illness of Helen Camberley who helped him leave his prison life behind Jorge Menderez, a doctor from Spain, has been found dead in a deserted warehouse in East London. A troubled man, he'd turned to counsellor Karen Lynwood seeking help. Now Karen's husband, John, is accused of his murder. Who is Menderez, and why did he come to London? Benson is defending the couple against seemingly impossible odds, while secrets from his own past threaten to overwhelm him... Praise for Summary Justice and Blind Defence 'Assured storytelling and highly intriguing moral complexity. I tore through it' Chris Brookmyre 'The courtroom scenes are brilliant, and Benson really comes alive under pressure. Stubborn, fitful and contradictory, he's a highly individualised creation' Spectator 'Punchy dialogue and devious plotlines . . . compelling' The Times
Visa hela texten

William Brodrick was born in Bolton, Lancashire in 1960. Aged ten the family moved first to Australia and then Canada. He studied philosophy, theology and law, worked with homeless people in London, and then became a barrister, joining a set of chambers in Newcastle-upon-Tyne. He is the author of six Father Anselm novels. The Sixth Lamentation, was a Richard and Judy Book Club Selection, A Whispered Name won the CWA Gold Dagger for 2009 and The Day of the Lie received the Granice Crime Fiction Award at the Krakow Book Fair in 2012 He is married with three children. The family live in Normandy, France.