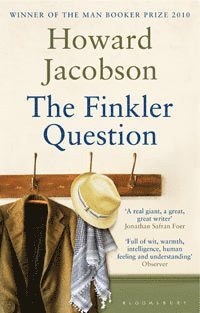 av Howard Jacobson
Häftad Engelska, 2011-05-03
131
Köp
Spara som favorit
Skickas inom 7-10 vardagar.
Gratis frakt inom Sverige över 159 kr för privatpersoner.
Finns även som
Visa alla 1 format & utgåvor
WINNER OF THE MAN BOOKER PRIZE Julian Treslove, a professionally unspectacular former BBC radio producer, and Sam Finkler, a popular Jewish philosopher, writer and television personality, are old school friends. Despite very different lives, they've never quite lost touch with each other - or with their former teacher, Libor Sevcik. Both Libor and Finkler are recently widowed, and together with Treslove they share a sweetly painful evening revisiting a time before they had loved and lost. It is that very evening, when Treslove hesitates a moment as he walks home, that he is attacked - and his whole sense of who and what he is slowly and ineluctably changes.
Visa hela texten

'How is it possible to read Howard Jacobson and not lose oneself in admiration for the music of his language, the power of his characterisation and the penetration of his insight? ... The Finkler Question is further proof, if any was needed, of Jacobson's mastery of humour' * The Times * Wonderful ... Jacobson is seriously on form' * Evening Standard * 'There are few writers who exhibit the same unawed respect for language or such a relentless commitment to re-examining even the most seemingly unobjectionable of received wisdoms' * Daily Telegraph * 'Full of wit, warmth, intelligence, human feeling and understanding. It is also beautifully written with that sophisticated and near invisible skill of the authentic writer' * Observer *

An award-winning writer and broadcaster, Howard Jacobson was born in Manchester, brought up in Prestwich and was educated at Stand Grammar School in Whitefield, and Downing College, Cambridge, where he studied under F. R. Leavis. He lectured for three years at the University of Sydney before returning to teach at Selwyn College, Cambridge. His novels include The Mighty Walzer (winner of the Bollinger Everyman Wodehouse Prize), Kalooki Nights (longlisted for the Man Booker Prize) and, most recently, the highly acclaimed The Act of Love. Howard Jacobson lives in London.