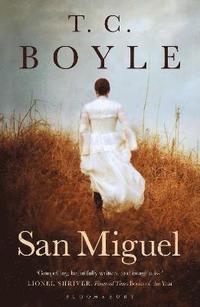 av T C Boyle
Häftad Engelska, 2013-08-01
119
Köp
Spara som favorit
Skickas inom 7-10 vardagar.
Fri frakt inom Sverige över 159 kr för privatpersoner.
Finns även som
Visa alla 3 format & utgåvor
The schooner from Santa Barbara arrives at the tiny, desolate island on New Year's Day, 1888. As the trunks are unloaded onto the wet sand, thirty-eight-year-old Marantha Waters looks at the cliffs falling away into the churning sea. This is the first day of her new life on San Miguel. Joined by her husband, a fiercely possessive Civil War veteran who will take over the operation of the sheep ranch on the island, Marantha strives to persevere in the face of brutal isolation. But the constant wind and sheep-ravaged wasteland shatter her illusions; her husband promised paradise. As he obsessively resolves to stay - and becomes increasingly distant from her and their adopted daughter Edith - Marantha's blighted lungs grow weaker in the dampness. Two years later, Edith, now a spirited teenager and an aspiring actress, will exploit every opportunity to escape the captivity her father has imposed on her. March, 1930. Another family - and another bride - arrives on San Miguel. Elise Lester, a librarian from New York City, and her husband Herbie, a World War I veteran full of manic energy, achieve a celebrity of sorts as the news cameras take an interest in these wayward people living in the wild. But the unyielding island is haunted by its history. Will the family be able to cling together as the war threatens to pull everything apart? San Miguel is a vivid and gripping story of hard lives pitched against the elements, the desires of stubborn men and the unbearable burden of love, from master American storyteller T. C. Boyle.
Visa hela texten

An involving historical read and yet another illustration of this author's astonishing range. There seems to be no subject or genre that Boyle won't tackle with brio -- <b>Lionel Shriver</b> * <B>Guardian, Books of the Year</B> * Boyle tells an extraordinary story of human weakness and survival, with high intelligence and a terrific eye for detail -- Kate Saunders * <B>The Times</B> * Though I generally shy from flap-copy hyperbole of this sort, T. C. Boyle is by far and away one of the most inventive, adventurous and accomplished fiction writers in the US today ... Most of all, he is a mesmerising storyteller, which is magnificently on display in his latest, San Miguel ... a dense, lushly detailed novel .... marking the exceptionally fine lines in San Miguel would have entailed underscoring the entire text ... this isn't a review, really. It's a love letter -- Lionel Shriver * <B>Financial Times</B> * A history novel of almost heroic restraint, its prose remains resolutely unflashy, and its tone is sympathetic to the point of genuine warmth ... a touching, even gripping allegory of the doomed nature of human striving -- James Walton * <B>Spectator</B> * A bareback ride into the abyss -- Tom Cox * <B>Observer</B> * His evocations of landscape are vivid and he can dream up a cast of characters -- Belinda McKeon * <B>Guardian</B> * [A] fine new novel ... He is [...] masterful at presenting this enclosed world, and he examines the debilitating effects of isolation on men and women -- Philip Womack * <B>Daily Telegraph</B> * It's extraordinarily direct, sympathetic and pretty, with Boyle's characteristic aliveness to the past and its telling little details -- Todd McEwen * <B>Glasgow Sunday Herald</B> * Mesmerising and elegiac ... Boyle skilfully captures that tension-filled quietude in the pared-down, mundane details of cleaning, cooking, caring for livestock and enduring the tedium of unchanging days * <B>Scotsman</B> * Permeated with an elegiac tone ... Atmospherically it is resonant of The Piano, Jane Campion's passionate novel of pioneering tenacity ... A powerful meditation on the skirmish between character and circumstance in these marginal lives in America's history * <B>Independent</B> *

T. C. Boyle's novels include World's End, winner of the PEN/Faulkner Award for Fiction, The Tortilla Curtain, the New York Times bestseller, The Women and, most recently, When the Killing's Done. His work has been translated into twenty-five languages and he is a member of the Academy of Arts and Letters. He lives in California.