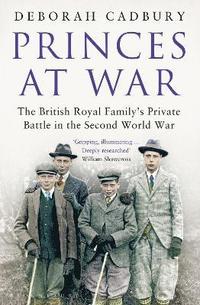 av Deborah Cadbury
Häftad Engelska, 2016-02-11
169
Köp
Spara som favorit
Skickas inom 5-8 vardagar.
Fri frakt inom Sverige för privatpersoner.
Finns även som
Visa alla 1 format & utgåvor
In 1936, the monarchy faced the greatest threats to its survival in the modern era - the crisis of abdication and the menace of Nazism. The fate of the country rested in the hands of George V's sorely unequipped sons: Edward VIII abandoned his throne to marry divorced American socialite Wallis Simpson; Prince Henry preferred the sporting life of a country squire; the glamorous and hedonistic Prince George, Duke of Kent, was considered a wild card; and stammering George VI felt himself woefully unprepared for the demanding role of King. As Hitler's Third Reich tore up the boundaries of Europe and Britain braced itself for war, the new king struggled to manage internal divisions within the royal family. Drawing on many new sources including from the Royal Archives, Princes at War goes behind the palace doors to tell the thrilling drama of Britain at war.
Visa hela texten

Impeccably researched, and written with all the brio and understanding of a major historical novel, Princes at War takes us intimately and even shockingly into the human dynamics of a barely functional family at the time of our greatest peril * David Kynaston, author of Austerity Britain * What happened next? After the abdication of Edward VIII, the crown passed to his reluctant and painfully shy younger brother, George, and the royal 'firm' was faced with the task of putting together again the shattered shards of monarchy. This was no easy task given the disparate personalities and life styles of the royal brothers as this this fascinating, detailed and often surprising book reveals * Juliet Gardiner, author of The Thirties * Cadbury weaves an engaging portrait of a king resigned to his fate yet honorably resolute ... A lively tale of monarchical machinations, more familiar to American readers since The King's Speech * Kirkus * Deborah Cadbury combines the family drama against the backdrop of the war with terrific narrative verve * Daisy Goodwin, The Times * The inner tensions of the palace during wartime and the inner tensions of a remarkable family make for one of the best, and ultimately most uplifting, stories of the war years * Boston Globe * A highly readable and finely written account of the drama which threatened to bring King and country crashing down * Daily Express * A well-researched and entertaining account of a particularly poignant period of history **** * Philip Ziegler, Daily Telegraph *

Deborah Cadbury is the author of seven acclaimed books including Chocolate Wars, The Dinosaur Hunters, The Lost King of France and The Seven Wonders of the Industrial World, for which her accompanying BBC series received a BAFTA nomination. Before turning to writing full time she worked for thirty years as a BBC TV producer and executive producer and has won numerous international awards including an Emmy. She lives in London.