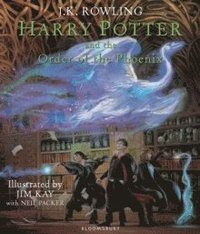 Harry Potter and the Order of the Phoenix

av J K Rowling
Inbunden Engelska, 2022-10-11
9-12 år
470
Köp
Spara som favorit
Finns även som
Visa alla 8 format & utgåvor
The Sunday Times best-selling Illustrated Edition of J.K. Rowling's fifth Harry Potter adventure, brilliantly evoked in full colour by Kate Greenaway medal winner Jim Kay, and acclaimed guest artist Neil Packer. As the Order of the Phoenix keeps watch over Harry Potter, troubled times have come to Hogwarts in a year filled with secrets, subterfuge and suspicion. The deliciously dark fifth instalment of Jim Kay's inspired reimagining of J.K. Rowling's classic series is an epic artistic achievement, featuring over 160 illustrations in an astonishing range of visual styles. Now an exciting new collaboration brings together two virtuoso artistic talents, as Kate Greenaway Medal winner Jim Kay is joined by acclaimed guest illustrator Neil Packer, winner of the 2021 BolognaRagazzi Award for non-fiction. Prepare to be enchanted once again as Jim Kay depicts J.K. Rowling's wizarding world with the dazzling artistic alchemy fans around the globe have come to know and love, perfectly complemented by Neil Packer's own unique and eclectic illustrations, skilfully woven into the heart of the story. This is a stunning visual feast of a book, filled with dark magical delights for both fans and new readers alike. Breathtaking scenes, iconic locations and unforgettable characters await inside - Luna Lovegood, Professor Umbridge, Grawp the giant, and many more - as Harry Potter and Dumbledore's Army prepare for the coming battle against Lord Voldemort. Perfect for Potterheads of all ages! 'Seeing Jim Kay's illustrations moved me profoundly. I love his interpretation of Harry Potter's world, and I feel honoured and grateful that he has lent his talent to it' - J.K. Rowling _______________ A bestseller in The Sunday Times charts, October 2022.
Visa hela texten

J.K. Rowling is best known as the author of the seven Harry Potter books, which were published between 1997 and 2007. The enduringly popular adventures of Harry, Ron and Hermione have gone on to sell over 500 million copies, be translated into over 80 languages and made into eight blockbuster films. Alongside the Harry Potter series, she also wrote three short companion volumes for charity: Quidditch Through the Ages and Fantastic Beasts and Where to Find Them, in aid of Comic Relief and Lumos, and The Tales of Beedle the Bard, in aid of Lumos. J.K. Rowling collaborated with playwright Jack Thorne and director John Tiffany to continue Harry's story in a stage play, Harry Potter and the Cursed Child, which opened in London in 2016 and is now playing worldwide. In the same year, she made her debut as a screenwriter with the film Fantastic Beasts and Where to Find Them, the first in a series featuring Magizoologist Newt Scamander, which was inspired by the original companion volume. J.K. Rowling has also written a standalone novel, The Casual Vacancy, and is the author of the Strike crime series under the pseudonym Robert Galbraith. Both have been adapted for television. In 2020 J.K. Rowling returned to publishing for younger children with the fairy tale The Ickabog, the royalties from which she is donating to groups affected by the Covid-19 pandemic. Her latest children's novel The Christmas Pig, a standalone adventure story, was published in 2021. She has received many awards and honours, including an OBE and a Companion of Honour for services to literature and philanthropy. She lives in Scotland with her family. Jim Kay won the Kate Greenaway Medal in 2012 for his illustrations in A Monster Calls by Patrick Ness. He studied illustration at the University of Westminster, and worked in the Library & Archives of Tate Britain and then as an assistant curator of botanical illustrations at the Royal Botanic Gardens at Kew before returning to producing art full-time. After a one-man exhibition at Richmond Gallery he was approached by a publisher and his freelance career began. Alongside his illustration work, Jim has produced concept work for film and television, and contributed to the group exhibition Memory Palace at the V&A Museum in London. The Illustrated Edition of Harry Potter and the Philosopher's Stone was published to international acclaim. Bloomsbury has commissioned Jim to illustrate all seven books in J.K. Rowling's classic series. Jim lives and works in East Sussex with his wife. NEIL PACKER is an accomplished illustrator - his most recent project, One of a Kind, won the BolognaRagazzi Award for non-fiction in 2021. He lives in London with his son.