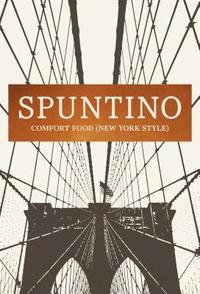 av Russell Norman
Inbunden Engelska, 2015-09-10
299
Köp
Spara som favorit
Finns även som
Visa alla 1 format & utgåvor
Hidden behind rust-coloured frontage in the bustling heart of London's Soho, Spuntino is the epitome of New York's vibrant restaurant scene. After bringing the bacari of Venice to the backstreets of the British capital at his critically acclaimed restaurant POLPO, Russell Norman scoured the scruffiest and quirkiest boroughs of the Big Apple to find authentic inspiration for an urban, machine-age diner. Since its smash-hit opening in 2011, the restaurant has delivered big bold flavours with a dose of swagger to the crowds who flock to its pewter-topped bar. Spuntino will take you on culinary adventure from London to New York and back, bringing the best of American cuisine to your kitchen. The 120 recipes include zingy salads, juicy sliders, oozing pizzette, boozy desserts and prohibition-era cocktails. You'll get a glimpse of New York foodie heaven as Russell maps out his walks through the city's cultural hubs and quirky neighbourhoods such as East Village and Williamsburg, discovering family-run delis, brasseries, street traders, sweet shops and liquor bars. With radiant photography by Jenny Zarins capturing New York's visceral grittiness, Spuntino pays homage to the energy, dynamism and extraordinary cuisine that the world's greatest melting pot has inspired.
Visa hela texten

Nails it * Esquire * For any New York wannabe who is up for a bit of culinary adventure * Easy Food * POLPO does what a great cookbook should do: it makes you urgently want to cook and breaks new territory * Daily Telegraph on POLPO * Wonderful ... the dishes are simple, with relatively few ingredients, but they're inspired. The grilled courgettes with toasted breadcrumbs, for instance, was sublime. The pages of my book are already smeared with olive oil and egg; a good sign * Evening Standard on POLPO * A present for the greedy gourmets in your life * Observer on POLPO * Gorgeous * Daily Mail on POLPO * Recreate the joys of the trendy NY-style restaurant at home * Independent on Sunday * Brings the best of American cuisine to our kitchens * West Country Foodlover Magazine *

Russell Norman is a restaurateur. Over the last 20 years he has worked in many of London's landmark restaurants as a waiter, bartender, maitre d', general manager and operations director. In 2009 he founded an independent restaurant company with his best friend and has since opened eight restaurants in central London including Polpo, Spuntino and Mishkin's. His book POLPO: A Venetian Cookbook (of Sorts) was voted Waterstones Book of the Year 2012. In 2014 he presented The Restaurant Man, a six-part prime-time documentary for BBC2, and his second book SPUNTINO: Comfort Food, New York Style will be published in September 2015. russellnorman.co spuntino.co.uk / @Spuntino