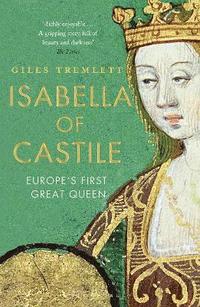 av Giles Tremlett
Häftad Engelska, 2017-11-02
210
Köp
Spara som favorit
Skickas inom 5-8 vardagar.
Gratis frakt inom Sverige över 159 kr för privatpersoner.
Finns även som
Visa alla 1 format & utgåvor
'Packed with vivid character sketches and lyrical description, Tremlett has told a gripping story, full of beauty and darkness' The Times WINNER OF THE 2018 ELIZABETH LONGFORD PRIZE In 1474, a twenty-three year old woman ascended the throne of Castile, the largest and strongest kingdom in Spain. Ahead of her lay the considerable challenge not only of being a young, female ruler in an overwhelmingly male-dominated world, but also of reforming a major European kingdom that was riddled with crime, corruption, and violent political factionism. Her marriage to Ferdinand of Aragon was crucial to her success, bringing together as it did two kingdoms, but it was a royal partnership in which Isabella more than held her own. Her pivotal reign was long and transformative, uniting Spain and laying the foundations not just of modern Spain, but of the one of the world's greatest empires. With authority and flair, acclaimed historian Giles Tremlett Tremlett relates the story of this legendary, if controversial, first initiate in a small club of great European queens that includes Elizabeth I of England, Russia's Catherine the Great, and Britain's Queen Victoria.
Visa hela texten

Magisterial ... Tremlett's contention, which he supports with a sublime presentation of facts and interpretation, is that Isabella represents the first member in the exclusive club of great European queens who exercised sovereign power in their own hand -- Starred Review * Booklist * Richly enjoyable ... He seeks to understand his subject, while never underplaying the appalling impact of some of her decisions. Packed with vivid character sketches and lyrical description, Tremlett has told a gripping story, full of beauty and darkness * The Times * A triumphant and chilling account of the rise of Spain and its New World conquests * Daily Telegraph * Magnificent * Sunday Telegraph * This is a most enjoyable book - a lively, intense page-turner written in straight-forward, unpretentious prose ... Tremlett balances academic scholarship with journalistic flair to produce an enthralling biography -- Rebecca Rist * Tablet * Magnificent * Daily Telegraph * Tremlett uses his gifts as a writer on Spain's history to offer us a voluminous biography with fluent and evocative narrative that fully exploits the romantic aspects of the age * Times Literary Supplement * Splendid ***** * Daily Telegraph * The reign of Isabella of Castile and her partnership with Ferdinand of Aragon saw the beginning of the transformation of Spain into a major global power. Tremlett offers a detailed assessment of a woman who to her supporters, was a great Christian monarch, but to her detractors was a fanatical tyrant * Mail on Sunday, Best Paperbacks * Brings to life "Europe's first great queen" - in reality, "a usurper" - who began the unification of Spain and, less attractively, the expulsion of both Jews and Muslims, in an early example of ethnic cleansing * Daily Telegraph *

Giles Tremlett is the Madrid correspondent for the Economist. Until 2013, he covered Spain for the Guardian, for which he is now a contributing editor. He has lived in, and written about, Spain for the past twenty years, and is the author of Catherine of Aragon: The Spanish Queen of Henry VIII and Ghosts of Spain: Travels Through Spain and Its Silent Past. He lives in Madrid with his wife and their two children.