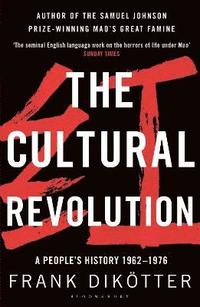 av Frank Dikoetter
Häftad Engelska, 2017-02-09
169
Köp
Spara som favorit
Skickas inom 5-8 vardagar.
Gratis frakt inom Sverige över 159 kr för privatpersoner.
SHORTLISTED FOR THE PEN HESSELL-TILTMAN PRIZE 2017 After the economic disaster of the Great Leap Forward that claimed tens of millions of lives between 1958 and 1962, an ageing Mao launched an ambitious scheme to shore up his reputation and eliminate those he viewed as a threat to his legacy. The stated goal of the Cultural Revolution was to purge the country of bourgeois, capitalist elements he claimed were threatening genuine communist ideology. But the Chairman also used the Cultural Revolution to turn on his colleagues, some of them longstanding comrades-in-arms, subjecting them to public humiliation, imprisonment and torture. Young students formed Red Guards, vowing to defend the Chairman to the death, but soon rival factions started fighting each other in the streets with semi-automatic weapons in the name of revolutionary purity. As the country descended into chaos, the military intervened, turning China into a garrison state marked by bloody purges that crushed as many as one in fifty people. When the army itself fell victim to the Cultural Revolution, ordinary people used the political chaos to resurrect the marked and hollow out the party's ideology. In short, they buried Maoism. In-depth interviews and archival research at last give voice to the people and the complex choices they faced, undermining the picture of conformity that is often understood to have characterised the last years of Mao's regime. By demonstrating that decollectivisation from below was an unintended consequence of a decade of violent purges and entrenched fear, Frank Dikotter casts China's most tumultuous era in a wholly new light. Written with unprecedented access to previously classified party documents from secret police reports to unexpurgated versions of leadership speeches, this third chapter in Frank Dikotter's extraordinarily lucid and ground-breaking 'People's Trilogy' is a devastating reassessment of the history of the People's Republic of China.
Visa hela texten

Definitive and harrowing -- Book of the Week * Daily Mail * Dikoetter never allows his intense account to degenerate into melodrama. Networks of power and information are carefully traced, revealing a movement that spiralled into general score-settling on such a scale that Mao and his allies had only intermittent control ... A fascinating account of how people twisted or resisted the aims of Mao's movement * Daily Telegraph * Definitive and harrowing -- Roger Lewis, Book of the Week * Daily Mail * Magnificent ... The author gives full acknowledgement to memoirs and scholarly works but it is his own archival research, allied to a piercing critique, that lifts the book to a higher level. He has mastered the details so well that with the most sparing use of description he weaves a vivid tapestry of China at the time ... This brilliant book leaves no doubt that Mao almost ruined China and left a legacy of paranoia that still grips its modern dictatorship under the latest autocrat, Xi Jinping -- Michael Sheridan * Sunday Times * The murderous frenzy of the times, which tore apart friends and families, not to speak of the Communist party itself, is powerfully conveyed -- Book of the Week * The Times * Given the tortuous nature of the event, what contribution does Frank Dikoetter's new book make to our understanding of the Cultural Revolution? The answer is an immense one. He sheds important new light on what has long been a dark (in several respects) period in Chinese history ... The Cultural Revolution exposes, in measured prose and well-documented analysis, the impact of communist rule in a period of extraordinary stress, tension and violence, most of it unleashed by the Party itself. Together, these three books, which Dikoetter calls the 'People's Trilogy', constitute a major contribution to scholarship on modern China, one that is unequalled, certainly in the English language ... There is something simply unanswerable about many of his judgments on the effects of almost seventy years of communism in China. Much of this has to do with his use of documents from official archives in China, to which access is difficult ... his patience and endurance must be considerable and his Chinese-language skills formidable .... both revealing and rewarding reading - for specialists and non-specialists alike * Literary Review * Gripping, horrific ... A significant event in our understanding of modern China * International New York Times * A fine, sharp study of [a] tumultuous, elusive era ... Excellent follow-up to his groundbreaking previous work ... Dikoetter tells a harrowing tale of unbelievable suffering. A potent combination of precise history and moving examples * Kirkus * Outstanding * The Week * Searing * Irish Times * During 10 years of insanity, between 1.5m and 2m people lost their lives. It is all chillingly documented in Frank Dikotter's brilliant new book -- Niall Ferguson * Sunday Times * Magisterial * New Statesman * His "people's trilogy" ... has been hailed as the seminal English language work on the subject. The trilogy's enduring value lies in its unstinting description of the horrors of life under Mao ... Dikoetter has done much to ensure that we see the full horror of what happened under Mao * Sunday Times * A significant event in our understanding of modern China * Scotland on Sunday * It includes colourful sketches of famous individuals, a fast-paced account of key political events, and some interesting discussions of how ordinary people experienced and contributed to specific Cultural Revolution episodes ... Impressive chapters on the early 1970s that explore and celebrate grassroots developments * Financial Times * A detailed, sober, bleak reminder of the horror and chaos unleashed by Mao Zedong * Tablet * Superb * Tribune * What sets Dikoetter apart from many other historians of this period is his obsession with detail and insistence on bringing the story back to the individual account ... The level of rese

Frank Dikoetter is Chair Professor of Humanities at the University of Hong Kong and Professor of the Modern History of China at the University of London. He has pioneered the use of archival sources and published ten books that have changed the way historians view and understand China, from the classic The Discourse of Race in Modern China (1992) to his last book entitled The Tragedy of Liberation: A History of the Chinese Revolution 1945-1957 (2013). Frank Dikoetter is married and lives in Hong Kong.