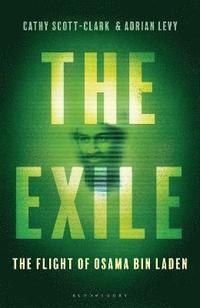 The Flight of Osama bin Laden

av Adrian Levy, Catherine Scott-Clark
Inbunden Engelska, 2017-05-23
269
Köp
Spara som favorit
Skickas inom 7-10 vardagar.
Gratis frakt inom Sverige över 159 kr för privatpersoner.
Finns även som
Visa alla 1 format & utgåvor
The extraordinary inside story of Osama bin Laden and Al Qaeda in the years after 9/11. Following the attacks on the Twin Towers, Osama bin Laden, the most wanted man in the world, eluded intelligence services and Special Forces units for almost a decade. Using remarkable, first-person testimony from bin Laden's family and closest aides, The Exile chronicles this astonishing tale of evasion, collusion and isolation. In intimate detail, The Exile reveals not only the frantic attack on Afghanistan by the United States in their hunt for bin Laden but also how and why, when they found his family soon after, the Bush administration rejected the chance to seize them. It charts the formation of ISIS, and uncovers the wasted opportunity to kill its Al Qaeda-sponsored founder; it explores the development of the CIA's torture programme; it details Iran's secret shelter for bin Laden's family and Al Qaeda's military council; and it captures the power struggles, paranoia and claustrophobia within the Abbottabad house prior to the raid. A landmark work of investigation and reportage, The Exile is as authoritative as it is compelling, and essential reading for anyone concerned with history, security and future relations with the Islamic world.
Visa hela texten

Absolutely spine-chilling, breathless, heart-rending, astonishing. So hard to put down * Sunday Times on The Siege * Propulsive, intense, exceedingly well-reported . . . a tragedy and a thriller with concussive human and political resonance. I read it in what felt like three blinks * New York Times on The Siege * Compulsive and brilliantly researched. Reads like a fast-paced thriller -- William Dalrymple on 'The Siege' By tracking down the myriad bin Laden family members, associates and al-Qaeda members that inhabit this huge tour-de-force of a read, the authors have brought the personality of bin Laden into a sharper focus than could ever have been imagined. The detail mustered is little short of incredible, and evidently the result of forensic research only the best of investigative journalists could dig out ... Big it might be, but it is also a page-turner. There have been many books before on bin Laden and al-Qaeda, but this is one of the best -- David Pratt * Glasgow Herald * This book is a tour de force and the first detailed account told by al-Qaeda members themselves, making good use of the diaries of Abu Zubaydah, the captured al-Qaeda facilitator, as well as extensive interviews with one of its religious thinkers ... It tells us lots of things we knew, but in far more detail -- Christina Lamb * Sunday Times * Remarkable ... They have produced the best account yet of what happened to al-Qaida after 9/11: it is an astonishingly good piece of work -- Owen Bennett-Jones * Guardian * The authors have tracked down and spoken with many of the participants, including senior al-Qaeda members and close relatives of Osama bin Laden, which in itself is a piece of outstanding journalistic bravery. As a result, the book has an impact and immediacy far stronger than much of the other literature on the subject. Scott-Clark and Levy deserve huge credit for this * Literary Review * Detailed and meticulous, the book tackles the subject from all angles, providing a panoramic view of the subject and acting to enlighten and inform the reader ... at once fascinating and heady * TheBookbag.co.uk *

Adrian Levy and Cathy Scott-Clark are the authors of several books, most recently the acclaimed The Siege: Trapped Inside the Taj Hotel. Run or Hide?, published by Penguin in 2013. For sixteen years they worked as foreign correspondents and investigative reporters for the Sunday Times and the Guardian. In 2009 the One World Trust named them British Journalists of the Year, having won Foreign Correspondents of the Year in 2004. They co-produce documentaries which have been nominated at the Amnesty International Media Awards and the Edinburgh International Television Festival, and longlisted at the BAFTAs. Currently they are filming several new projects in South Asia.