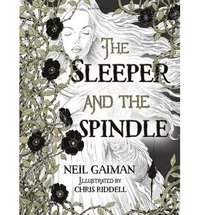 The Sleeper and the Spindle

av Neil Gaiman
(1 röst)
Inbunden Engelska, 2014-10-23
149
Köp
Spara som favorit
Skickas inom 5-8 vardagar.
Fri frakt inom Sverige över 159 kr för privatpersoner.
Finns även som
Visa alla 2 format & utgåvor
WINNER of the CILIP Kate Greenaway Medal 2016 A thrillingly reimagined fairy tale from the truly magical combination of author Neil Gaiman and illustrator Chris Riddell - weaving together a sort-of Snow White and an almost Sleeping Beauty with a thread of dark magic, which will hold readers spellbound from start to finish. On the eve of her wedding, a young queen sets out to rescue a princess from an enchantment. She casts aside her fine wedding clothes, takes her chain mail and her sword and follows her brave dwarf retainers into the tunnels under the mountain towards the sleeping kingdom. This queen will decide her own future - and the princess who needs rescuing is not quite what she seems. Twisting together the familiar and the new, this perfectly delicious, captivating and darkly funny tale shows its creators at the peak of their talents. Lavishly produced, packed with glorious Chris Riddell illustrations enhanced with metallic ink, this is a spectacular and magical gift.
Visa hela texten

Spellbindingly illustrated -- Gaby Wood * Saturday Telegraph * Suffused with joy and melancholy and underpinned by the knowledge of where it comes from and where it wants to go... It is absolutely a retelling for our age, but also for ages still to come -- Lucy Mangan * The Guardian * Magical, sumptuous, transporting * The Big Issue * Unforgettable, unpredictable and utterly enchanting for anyone between the ages of seven and seventy -- Amanda Craig * The New Statesman * Will hold the reader spellbound from start to finish * The Guardian * A richly nuanced tale with a contemporary slant that will fire your imagination - and haunt your dreams * Times Educational Supplement *

Neil Gaiman has written highly acclaimed books for both children and adults and is the first author to have won both the Carnegie and Newbery Medals for the same work - The Graveyard Book. Many of his books, including Coraline and Stardust, have been made into films; Neverwhere has been adapted for TV and radio; and American Gods and Good Omens have been adapted into major TV series. He has also written two episodes of Doctor Who and appeared in The Simpsons as himself. Chris Riddell is a much loved illustrator and acclaimed political cartoonist. He has won the Costa Children's Book Award, the Nestle Gold Award is the only artist to have won the Kate Greenaway Medal three times, most recently for his illustrations in The Sleeper and the Spindle. He was Waterstones Children's Laureate from 2015 to 2017 and has illustrated the work of many celebrated children's authors, including five Neil Gaiman titles and J.K. Rowling's The Tales of Beedle the Bard. He is the author of the bestselling Goth Girl and Ottoline series and co-creator of The Edge Chronicles.