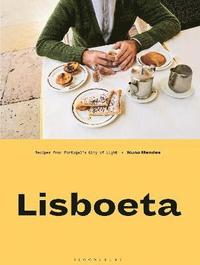 Recipes from Portugal's City of Light

av Nuno Mendes
Inbunden Engelska, 2017-10-19
279
Köp
Spara som favorit
Skickas inom 7-10 vardagar.
Fri frakt inom Sverige för privatpersoner.
Finns även som
Visa alla 1 format & utgåvor
'It's not all sardinhas. Just ask the man who made Portuguese food cool' The Times 'Offers so much more than just delightful recipes' Evening Standard 'Nuno Mendes' book is a celebration of hearty Lisbon fare' Metro 'With Lisboeta, I feel guided through the cuisine of Portugal's capital city. This book not only shares the warmth of Nuno's cooking but also tells the stories behind eating in Lisbon' Rene Redzepi - Head Chef at Noma, Copenhagen Lisbon is known as Portugal's 'City of Light', its beautiful, tiled buildings and cobbled streets illuminated by the reflections of the nearby waters. It is also one of the great undiscovered culinary centres of Europe. Internationally renowned chef Nuno Mendes is a 'Lisboeta' (native of Lisbon) and in this groundbreaking cookbook, he invites you to experience his favourite places, and the incredible food you will discover there. Sharing recipes inspired by the dishes that he loves, Nuno takes you through a typical day in Lisbon. Here you will discover the secrets to the most delicious pasteis de nata, the custard tarts for which Lisbon is so famous, and bolas de Berlim, fluffy doughnuts stuffed with custard that are sold on the beach. For lunch you might sample some typical seafood, like squid sizzling in a pan with garlic and coriander, or grilled sardines with a roasted green pepper salad. And as night draws in, Nuno offers his recipes for rich and warming dishes like slow-baked lamb chanfana and roasted orange-rub pork belly with fennel - which may even be followed with a cheeky prego sandwich after dinner. These are the heart-warming, vibrant dishes of a city with a modern, bustling food scene that is nevertheless steeped in centuries-old traditions. Nuno's portraits of Lisbon's idiosyncrasies are threaded through the pages: impromptu sardine grills, endless snacking and city-wide street carnivals. With luminous photography shot on location, this book will bring to life Portugal's magnificent capital city and its fabulous cuisine.
Visa hela texten

Shortlisted for the 2017 Food Book Award * Andre Simon * It's not all sardinhas. Just ask the man who made Portuguese food cool * The Times * Offers so much more than just delightful recipes * Evening Standard * Nuno Mendes' book is a celebration of hearty Lisbon fare * Metro *

Nuno Mendes is an internationally renowned Portuguese chef. Born and raised in Lisbon, he worked in America, Japan and Spain before heading up a string of critically acclaimed restaurants in London, including Bacchus and Viajante. A pioneer of the supper club movement, in 2009 he set up The Loft Project where he invited up-and-coming chefs from around the world to cook meals for small groups of diners. Nuno is executive chef at London's Chiltern Firehouse, and in 2015 he launched his first solo venture, restaurant Taberna do Mercado in Old Spitalfields Market, which focuses on the food and wine of his native country. He also writes a weekly recipe column for the Guardian. @NunoViajante