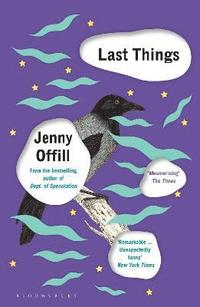 From the author of Weather, shortlisted for the Women's Prize for Fiction 2020

av Jenny Offill
Häftad Engelska, 2016-06-16
109
Köp
Spara som favorit
Finns även som
Visa alla 1 format & utgåvor
THE EXQUISITE DEBUT NOVEL FROM THE AUTHOR OF WEATHER, SHORTLISTED FOR THE WOMEN'S PRIZE FOR FICTION 2020 To eight-year-old Grace Davitt, her mother, Anna, is a puzzling yet wonderful mystery. This is a woman who has seen a sea serpent in the lake, who paints a timeline of the universe on the sewing-room wall, and who teaches her daughter a secret language which only they can speak. For Grace's father, however, the only truth is science, and increasingly he finds himself shut out by Anna as she draws Grace deeper and deeper into a strange world of myth and obsession. Selected as a Book of the Year in Guardian, Telegraph, Observer, Irish Times and New York Times. 'Unexpectedly funny' New York Times 'Full of imagination' Irish Times 'Mesmerising' The Times
Visa hela texten

Offill creates for Grace a mesmerising imaginary world ... She writes with a heartbreaking clarity ... and is dexterously able to evoke emotional extremity through pitch-perfect narrative compression * <b><i>The Times</i></b> * Engaging, funny, full of imagination, humour and invention ... A glorious debut * <b><i>Irish Times</i></b> * Offill's remarkable first novel is crisply written, economically constructed and so inventive that you read without a clue as to what anyone will say or do next ... If "last things" means things that will last, then this novel is one of them * <b><i>New York Times</i></b> * The unsentimental honesty means that the humour and the charm of the novel - both heavily in evidence - come exclusively from the writing * <b><i>Express on Sunday</i></b> * The charisma and damage of madness lend a desperate glamour to Last Things * <b><i>ELLE</b></i> * A pleasure the read and a tender evocation of childhood ... Full of myth, historical anecdote, scientific fact, cosmology and philosophy ... A gem of a book * <b><i>Tatler</b></i> * Brilliantly captures the confusion of childhood * <b><i>Red</i></b> *

Jenny Offill is the author of Last Things (1999), which was chosen as a Notable or Best Book of the Year by the Guardian, New York Times and Village Voice. It was also a finalist for the LA Times First Fiction Prize. In 2014, she published Dept. of Speculation, which was chosen as a Book of the Year by the Guardian, Telegraph, Observer, Irish Times and New York Times. She has also written several children's books, including 17 Things I'm Not Allowed to Do Anymore and While You Were Napping. She lives in Brooklyn, USA. jennyoffill.com