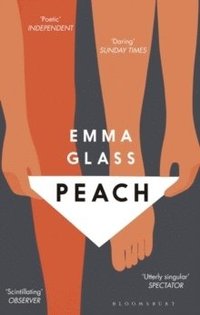 av Emma Glass
Häftad Engelska, 2019-01-10
119
Köp
Spara som favorit
Finns även som
Visa alla 1 format & utgåvor
_______________ SELECTED BY THE INDEPENDENT AND THE OBSERVER AS A BOOK OF THE YEAR 2018 _______________ 'An immensely talented young writer ... Her fearlessness renews one's faith in the power of literature ' - George Saunders, winner of the 2017 Man Booker Prize 'Poetic' - Independent 'The language is scintillating, the emotional heft remarkable' - Observer 'Daring' - Sunday Times 'Ferocious, startling, all-consuming' - Daisy Johnson, author of Fen _______________ Peach is a teenage girl like any other. She has college, and her friends, and her parents and the new baby, and her gorgeous boyfriend Green. She has her friend Sandy, and Sid the cat, and homework to do. But something has happened - something unspeakable - and her world has become unfamiliar, fractured into strange textures and patterns. Reeling through her refracted universe, Peach knows that the people she loves are in danger, real danger. If she is not to be swallowed whole, Peach must summon all her courage and dig deep into something nameless and strange that lies within her. _______________ 'Powerfully felt, sinister, vivid' - Literary Review 'This is a book to be devoured in a single sitting. Glass is an exciting new author to know' - Vogue 'An impressive achievement' - Big Issue
Visa hela texten

An immensely talented young writer ... Her fearlessness renews one's faith in the power of literature -- George Saunders, author of Lincoln in the Bardo, winner of 2017 Man Booker Prize Emma Glass's fictional debut - a novella-cum-prose poem - packs one hell of a punch ... Glass's commitment to the visceral is like nothing else I've read ... Peach inhabits a strange, horror-story realm of the hyperreal, and Glass's vision goes a long way towards portraying an experience that's near-impossible to articulate * Observer * Addressing an all-too-relevant issue, the novel charts the physical and psychological effects on Peach through stylised, poetic prose, self-confessedly informed by James Joyce's experiments with language. Referenced variously as "the new Jane Eyre", "intimately weird" and "exhilaratingly bold" * Independent, Books to look out for in 2018 * Glass's tale of a girl neglected by her parents and abused by others is a dark poetic read that is a visceral in its telling. It's an extraordinary debut that we urge you to seek out * Stylist, 'Books to read this Spring' * Peach by Emma Glass is a short and brutal tale of sexual assault and its resulting traumas that carries clear echoes of Eimear McBride ... The language is scintillating, the emotional heft remarkable * Observer, The best fiction for 2018 * Peach is shocking, revealing and deals with a subject most authors would shy away from. It is uncomfortable, worthy and brave ...Glass deserves recognition for her bravery regarding both the topic and style * Independent * A visceral work ... Glass uses fragmented, sensory language to evoke the lasting trauma of a sexual assault, from dissociative episodes to body dysmorphia. But for all its emotional insight, the book's boldest choice is its suspension between fantasy and reality * New Statesman * Genre-defying and brilliantly surreal novella ... Barely 100 pages, and somewhere between poetry and prose, this is a book to be devoured in a single sitting. Glass is an exciting new author to know * Vogue * An impressive achievement. There are obvious Joycean and Eimear McBridean influences on her writing, which is rich with onomatopoeia, musical rhythm and graphic, bloody imagery ...A truly original voice for the future. Peach is a meeting place for expressionist poetry and Cronenberg-style body horror that's not something you come across every day * Big Issue * A debut of consistently visceral writing ... The dark poetic world of Emma Glass's debut, Peach, immerses the reader in a young woman's personal hell ... Through prose that is lyrical, mythic and yet wonderfully clear, Peach expounds on themes of good versus evil, and the base nature of desire, consumption and carnality ... There is a spoken word vibrancy to Glass's prose ... Not since Patrick McCabe's The Butcher Boy has such symbolism been used so effectively to make clear one woman's brutal experiences * Irish Times * Surreal and unsettling, experimental and lyrical * Big Issue * A daring novel * Sunday Times * Powerfully felt, sinister, vivid * Literary Review * Related in an urgent, rhythmic unspooling of language ... Peach's voice is unsettling, idiosyncratic and discomforting, as well as being moving and utterly absorbing ... This sense of radical domestic fantasy gives the novel a raw power, as well as provoking multiple interpretations. It may occasionally confound, but Peach is a bold, memorable novel - gripping, strange and utterly singular * Spectator * Challenging fiction that disrupts narrative forms, provocatively outlandish stream of consciousness set in the aftermath of a sexual assault ... A gutsy, discomfiting experiment * Metro * It's apt to see that this debut author cites James Joyce, Gertrude Stein, Kate Bush and Justin Vernon (Bon Iver) in her acknowledgements. Peach is a hypnotic, visceral read ... Lyrically and visually driven, Glass's sentences read like powerful poems, and they encompass so much emotion, you'