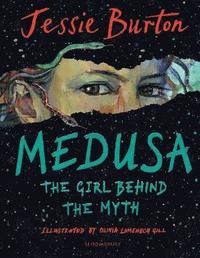 av Jessie Burton
Inbunden Engelska, 2021-10-14
159
Bevaka
Spara som favorit
Ännu ej utkommen – klicka "Bevaka" för att få ett mejl så fort boken boken går att köpa.
Finns även som
Visa alla 2 format & utgåvor
A dazzling, feminist retelling of Greek myth from the internationally bestselling author of The Miniaturist, stunningly illustrated by Olivia Lomenech Gill. Exiled to a far-flung island by the whims of the gods, Medusa has little company except the snakes that adorn her head instead of hair. But when a charmed, beautiful boy called Perseus arrives on the island, her lonely existence is disrupted with the force of a supernova, unleashing desire, love, betrayal ... and destiny itself. Filled with glorious full-colour illustrations by award-winning Olivia Lomenech Gill, this astonishing retelling of Greek myth is perfect for readers of Circe and The Silence of the Girls. Illuminating the girl behind the legend, it brings alive Medusa for a new generation.
Visa hela texten

Jessie Burton studied at the University of Oxford and then went on to the Royal Central School of Speech and Drama. She is the author of three novels for adults, The Miniaturist (2014) and The Muse (2016), both published in 38 languages, and The Confession (2019), which became an immediate Sunday Times bestseller. The Miniaturist and The Muse were Sunday Times no.1 bestsellers, New York Times bestsellers and Radio 4's Book at Bedtime. The Miniaturist went on to sell over a million copies around the world, and has also been adapted for television by the BBC. Jessie's first novel for children, The Restless Girls, was published by Bloomsbury in 2018. Olivia Lomenech Gill has a first-class degree in Theatre from the University of Hull and an MA in Printmaking from Camberwell College of Arts, and has built her career as a professional fine artist. Olivia's first professional illustration commission, Where My Wellies Take Me, written by Michael and Clare Morpurgo, was shortlisted for the CILIP Kate Greenaway Medal and won the English Association Picture Book Award. She is also the illustrator of Fantastic Beasts and Where to Find Them by J.K. Rowling. Olivia lives and works in North Northumberland in a timber studio she built by hand with her husband, a paper conservator.