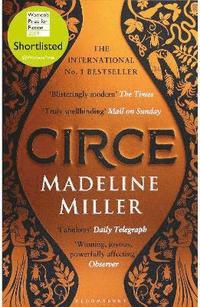 The No. 1 Bestseller from the author of The Song of Achilles

av Madeline Miller
(1 röst)
Häftad Engelska, 2019-04-01
146
Köp
Spara som favorit
Finns även som
Visa alla 3 format & utgåvor
The international Number One bestseller from the author of The Song of Achilles, shortlisted for the Women's Prize for Fiction Woman. Witch. Myth. Mortal. Outcast. Lover. Destroyer. Survivor. CIRCE. In the house of Helios, god of the sun and mightiest of the Titans, a daughter is born. Circe is a strange child - not powerful and terrible, like her father, nor gorgeous and mercenary like her mother. Scorned and rejected, Circe grows up in the shadows, at home in neither the world of gods or mortals. But Circe has a dark power of her own: witchcraft. When her gift threatens the gods, she is banished to the island of Aiaia where she hones her occult craft, casting spells, gathering strange herbs and taming wild beasts. Yet a woman who stands alone will never be left in peace for long - and among her island's guests is an unexpected visitor: the mortal Odysseus, for whom Circe will risk everything. So Circe sets forth her tale, a vivid, mesmerizing epic of family rivalry, love and loss - the defiant, inextinguishable song of woman burning hot and bright through the darkness of a man's world. THE NUMBER ONE INTERNATIONAL BESTSELLER CHOSEN AS A BOOK OF THE YEAR BY THE GUARDIAN, TELEGRAPH, SUNDAY TELEGRAPH, I PAPER, SUNDAY EXPRESS, IRISH TIMES, TIMES LITERARY SUPPLEMENT, AMAZON, AUDIBLE, BUZZFEED, REFINERY 29, WASHINGTON POST, BOSTON GLOBE, SEATTLE TIMES, TIME MAGAZINE, NEWSWEEK, PEOPLE, ENTERTAINMENT WEEKLY, KIRKUS, PUBLISHERS WEEKLY AND GOODREADS
Visa hela texten

A novel to be gobbled greedily in a single sitting * Observer * Circe is poised to become the literary sensation of the summer, as much for the quality of its writing as its timeliness * Sunday Times Magazine * Enough magic, enchantment, voyages and wonders to satisfy the most jaded sword-and-sorcery palate. Miller approaches Odysseus's story from Circe's point of view, richly evoking her protagonist's overlapping identities as goddess, witch, lover and mother -- Adam Roberts * Guardian, Books of the Year * A triumph * The Times, Books of the Year * Circe back as superwoman ... Homer's witch get a kickass modern makeover... Miller's Me Too-era, kickass portrait of a woman trying to defy the men and Fates arrayed against her is enchanting... Blisteringly modern * The Times * In a thrilling tour de force of imagination, Miller makes her otherworldly heroine a complex, sympathetic figure for whom we cheer throughout. Circe is a truly spellbinding novel, the mesmerising shimmer of ancient magic rising from it like a heat haze * Mail on Sunday * A brilliantly strange work of mythic science fiction, as effortlessly expressive within the palaces of gods as it is about the world below ... Superb ... This is both a fabulous novel and a fascinating retelling; the best compliment, perhaps, that any myth could hope for * Daily Telegraph * This year's novels were filled with the angry clamour of women's voices: ignored, idealistic or excitingly ambivalent. Madeline Miller reflected the mood for feminist revisionism with her lissom follow-up Circe, which casts the witch goddess in the Odyssey not as a bit player in a man's epic but as the star of her own show -- Claire Allfree * Daily Telegraph, Books of the Year * It was a big year for creative retelling of myth and pre-modern literature; a favourite was Madeline Miller's Circe, a distinctive, lyrical novel about power, agency and reponsibility, from the point of view of this crafty, much-misunderstood goddess -- Emily Wilson * Times Literary Supplement, Books of the Year * The writing is lovely, the tone assured, and the touch just right -- Alexander McCall Smith * Independent, Books of the Year * It is out of these insights that Miller achieves real narrative propulsion ... Supple, pitched in a register that bridges man and myth * Guardian * The first witch in Western literature sets Homer straight as she tells her life story, from her unhappy childhood to her lonely island exile. The woman who emerges is complex and sympathetic. A spellbinding tour de force of imagination * Mail on Sunday, 'Sizzling summer reads' * Miller has effected a transformation just as impressive as any of her heroine's own: she's turned an ancient tale of female subjugation into one of empowerment and courage full of contemporary resonances -- Lucy Scholes * Independent * What more could you wish for on holiday than this fabulously written re-imagining of the myth? Gods, monsters and mortals are lushly evoked in a page-turner that is as gripping as a soap opera and which triumphantly fuses myth with our contemporary concerns -- Elizabeth Buchan * Daily Mail, Books of the Summer 2018 * Dubbed the 'feminist Odyssey', there's so much to like about Circe. From the author of the much-loved The Song of Achilles, this novel puts a feminist spin on Greek mythology, recasting Circe, the vilified witch infamous for turning men into pigs, in a sympathetic light. Subverting the usual masculine tropes of epic adventure narratives, Miller tells the story of the women who have been historically silenced. And on top of that, she makes Greek myths and culture, which is often perceived as impenetrable and intimidating, accessible. A real page-turner * Elle Magazine * Illuminates known stories from a new perspective ... Miller has determined, in her characterization of this most powerful witch, to bring her as close as possible to the human, as a thoughtful and compassionate woman who learns to love unselfishly ... A highly psych

Madeline Miller is the author of The Song of Achilles, which won the Orange Prize for Fiction 2012, was shortlisted for the Stonewall Writer of the Year 2012, was an instant New York Times bestseller, and was translated into twenty-five languages. Miller holds an MA in Classics from Brown University, and she taught Latin, Greek and Shakespeare to high school students for over a decade. She lives outside Philadelphia. madelinemiller.com