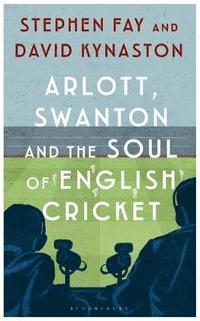 Arlott, Swanton and the Soul of English Cricket

av Stephen Fay, David Kynaston
Inbunden Engelska, 2018-04-19
229
Köp
Spara som favorit
Skickas inom 7-10 vardagar.
Fri frakt inom Sverige för privatpersoner.
Finns även som
Visa alla 2 format & utgåvor
A fascinating account of how two BBC broadcasters battled for the soul of English cricket during a time of great social change For more than a quarter of a century after the Second World War, as the BBC tightened its grip on the national consciousness, two of the most famous English voices were commentators on games of cricket. John Arlott and E.W. ('Jim') Swanton transformed the broadcasting of the nation's summer game into a national institution. For any cricket follower in his fifties or older, just the mention of their names immediately evokes a flood of memories. Swanton was born into a middle-class family and privately educated; Arlott was the son of a working-class council employee, educated at state schools until he left at the age of sixteen. Because of their strong personalities and distinctive voices - Swanton's crisp and upper-class, Arlott's with its Hampshire burr - each had a loyal following in the post-war years, when England's class system had a slot for almost everyone. Within a few minutes of the start of a conversation, it would be possible to identify the speaker as an Arlott or a Swanton man. Arlott and Swanton never grew to like each other, but both typified the contrasting aspects of post-war Britain and the way both it and the game they loved was to change. As England moved from a class-based to a more egalitarian society, nothing stayed the same - including professional cricket. Wise, lively and filled with rich social and sporting history, Arlott, Swanton and the Soul of English Cricket shows how these two very different men battled to save the soul of the game as it entered a new era.
Visa hela texten

Those old enough will welcome a wonderful insight into the cricketing voices of their childhood. Arlott, Swanton and the Soul of English Cricket reflects upon two titans of cricket journalism and broadcasting. Youngsters can discover them for the first time. Stephen Fay and David Kynaston combine seamlessly to produce a gem of a book -- Vic Marks * Observer 'Books of the Year' * Magnificent ... One of the best cricket books I've read in years: it makes long-forgotten matches live and breathe as though they were played yesterday -- Marcus Berkmann * Daily Mail 'Books of the Year' * A chronicle of 20th-century class difference, elegantly observed through the lives of the two men and their attitudes towards their beloved sport -- Emma John * Guardian 'Books of the Year' * A wonderfully readable and illuminating account of the game in the last half of the 20th century ... Beautifully written, meticulously researched and stuffed with rich sporting and social history, this must already be a candidate for Sports Book of the Year. Unputdownable -- Michael Simkins * Mail on Sunday * A triumph ... [Kynaston and Fay] both have inside-outside sensitivities that keep this near-seamless collaboration shrewd, worldly, balanced and fresh * Times Literary Supplement * [A] delightful and thoughtful book ... A nostalgic delight * Standpoint * John Arlott and EW Swanton defined cricket commentary in the second half of the 20th century ... As this wonderful biography shows, they were united by their love of the spirit of cricket, and stood together in resisting anything that compromised it, from bullying moguls to racism * Daily Telegraph * An important account of English cricket through the post-war decades from the glorious summer of 1947 to one-day cricket and Packer ... Cricket has always produced literature that weaves together sport and society and this book certainly presents an insight into post-war England that reaches far beyond the boundary rope * Country Life * A historian of peerless sensitivity and curiosity about the lives of individuals -- Praise for David Kynaston * Financial Times * John Arlott and EW Swanton were the voices of English cricket for much of the post-war years. This insightful, provocative book gently teases out the differences in their styles, backgrounds and personalities and shows why all this mattered in a society defined by class and in a sport riven by it -- Hugh MacDonald * Herald *

Bloggat om Arlott, Swanton and the Soul of English C...

Stephen Fay has written extensively on finance, the theatre and cricket. His books include Tom Graveney at Lord's, and he is a former editor of Wisden Cricket Monthly. David Kynaston has written twenty books, including Austerity Britain, Family Britain and Modernity Britain. His most recent cricket book is WG's Birthday Party, an account of the historic 1898 Gentlemen v Players match at Lord's.