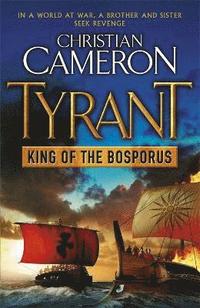 Tyrant: King of the Bosporus

av Christian Cameron
Häftad Engelska, 2011-10-13
149
Köp
Spara som favorit
Skickas inom 3-6 vardagar.
Fri frakt inom Sverige för privatpersoner.
Finns även som
Visa alla 1 format & utgåvor
In a world at war, a brother and sister seek revenge...Another drama-drenched story in a truly epic historical series. They were born in the middle of a battle, into a world at war. And from their first moments of life, twins Satyrus and Melitta were fighting for survival. Their father, a Greek mercenary, was cut down not long after they had taken their first breath; their Scythian mother was cruelly murdered when they were still children. But Satyrus and Melitta are children no more. They have learned how to fight, how to love, how to plot and how to kill. Now it is time to leave their adopted home, the city of Alexandria, and the protection of Alexander the Great's former general, Ptolemy - and seek revenge. Now it is time to go to war...
Visa hela texten

Cameron's gift is for spinning out a rich setting through his obvious devotion to Classics... plus, Cameron's ability to conjure up what Homer called "the battle haze" might make the ancient bard proud--BOSTON GLOBE & MAIL Engrossing... a sword-slash above the rest of its ilk--IRISH EXAMINER A sweeping, deeply moving epic that takes the reader into the heart of a different time and culture--HISTORICAL NOVELS REVIEW

Christian Cameron is a writer, re-enactor and military historian. He is a veteran of the United States Navy, where he served as both an aviator and an intelligence officer. He is a co-author, with his father Ken Cameron, of the acclaimed Gordon Kent military thriller series, as well as WASHINGTON AND CAESAR, a novel of the American Revolution. He now lives in Toronto with his wife and daughter, where he writes full time.