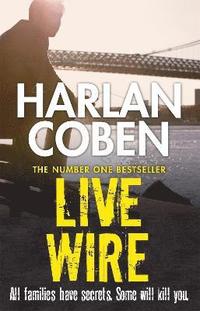 av Harlan Coben
Häftad Engelska, 2014-06-08
129
Köp
Spara som favorit
Skickas inom 7-10 vardagar.
Fri frakt inom Sverige över 159 kr för privatpersoner.
Finns även som
Visa alla 3 format & utgåvor
Sometimes the ugliest truth is better than the prettiest of lies... From the SUNDAY TIMES bestselling author of SIX YEARS. A beautiful woman walking into Myron Bolitar's office asking for help should have been a dream come true. Only this woman, Suzze T, is in tears - and eight months pregnant... Suzze's rock star husband has disappeared, and she fears the rumours questioning her baby's paternity have driven him away. For Myron, questions of fatherhood couldn't hit closer to home. His own father is clinging precariously to life, and the brother who abandoned the family years ago has resurfaced - with danger following close behind. Myron is soon forced to confront deep secrets in Suzze's past, his family's mortality - and his own...
Visa hela texten

In the hands of Harlan Coben you are kept guessing - and intrigued - until the last line * GUARDIAN * [A] brilliantly tense, beautifully written new mystery for Coben - possibly the most joyously readable crime writer in the world right now * HEAT * Harlan Coben is the modern master of the hook-and-twist - luring you in on the first page, only to shock you on the last * Dan Brown * Harlan Coben specialises in rousing the snake that lurks in the perfectly cut grass of American suburbia ... Coben makes you care about them but never neglects a plot that is full of his trademark shocks * SUNDAY TELEGRAPH *

Harlan Coben is an international No.1 bestselling thriller author. He is the winner of the EDGAR, SHAMUS and ANTHONY AWARDs - the first to receive all three. His books are published in 40 languages, with over 47 million copies in print worldwide. Both his standalone thrillers and series featuring the indomitable Myron Bolitar have been No.1 bestsellers in over a dozen countries, gracing the lists of the SUNDAY TIMES and the NEW YORK TIMES. His novel TELL NO ONE was turned into the smash hit French film of the same name, and received the highly coveted LUMIERE (French Golden Globe) for best picture as well as four CESARS (French Oscar). Harlan lives in New Jersey with his family. Find out more at www.harlancoben.com or follow him on Twitter @HarlanCoben