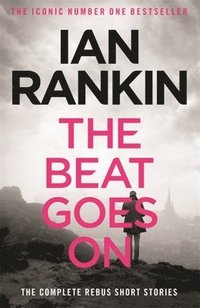 The Beat Goes On: The Complete Rebus Stories

av Ian Rankin
Häftad Engelska, 2015-06-30
229
Köp
Spara som favorit
Skickas inom 7-10 vardagar.
Fri frakt inom Sverige för privatpersoner.
Beställ boken senast måndag 7 december för leverans innan julafton
Finns även som
Visa alla 2 format & utgåvor
There is no detective like DI Rebus - brilliant, irascible and endlessly frustrating both to his friends and his long-suffering bosses. For over two decades he has walked through the dark places of Edinburgh . . . Now Rebus's life is revealed through this complete collection of stories, from his early days as a young DC in 'Dead and Buried' right up to the dramatic, but not quite final, retirement in 'The Very Last Drop'. This is the ultimate Ian Rankin treasure trove - a must for aficionados as well as a superb introduction to anyone looking to experience DI John Rebus, and the dark and twist-filled crimes he has to investigate, for the very first time.
Visa hela texten

'These murky tales exploring the deep recesses of the criminal psyche are well worth a read.' * DAILY EXPRESS * "A dangerous book to have on your bedside table - you just want to keep reading on and on into the wee small hours of the night - and a dangerous book to lend: make sure you get it back." * CORNFLOWER BOOKS * In this bumper volume he [Rankin] has collected all his Rebus short stories and the results are an undisputed delight... We witness Rebus in his early days as well as the later burdened-by-life incarnation and these vignettes with both new adventures and insights into existing cases with a new perspective, broaden our appreciation of the iconic Edinburgh cop. -- Maxim Jakubowski * LOVE READING * An essential volume for Rebus fans. * CRIME FICTION LOVER * "They are neat, pleasing, inventive... well made, a pleasure to read, one after the other, the work of a practiced and professional craftsman." * SCOTSMAN * "Rebus is genuinely fun to read no matter how dark his cases become... a deeply satisfying read and evokes the spirit of Edinburgh and Scotland in all its glory." * INDEPENDENT ON SUNDAY * "An enjoyable collection, frequently displaying the playfulness that is characteristic of the author" * INDEPENDENT * "Excellently crafted short stories." * TIMES *