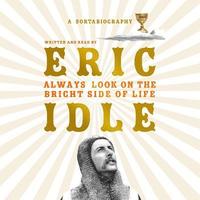 Always Look on the Bright Side of Life

av Eric Idle
CD-bok Engelska, 2018-10-02
339
Köp
Spara som favorit
Skickas inom 7-10 vardagar.
Fri frakt inom Sverige för privatpersoner.
Finns även som
Visa alla 6 format & utgåvor
We know him best for his unforgettable roles on Monty Python - from the Flying Circus to The Meaning of Life. Now, Eric Idle reflects on the meaning of his own life in this entertaining memoir that takes us on a remarkable journey from his childhood in an austere boarding school through his successful career in comedy, television, theatre and film. Coming of age as a writer and comedian during the Sixties and Seventies, Eric stumbled into the crossroads of the cultural revolution and found himself rubbing shoulders with the likes of George Harrison, David Bowie and Robin Williams, all of whom became dear lifelong friends. With anecdotes sprinkled throughout involving other close friends and luminaries such as Mike Nichols, Mick Jagger, Steve Martin, Paul Simon, Lorne Michaels, and many more, as well as the Pythons themselves, Eric captures a time of tremendous creative output with equal parts hilarity and heart. In Always Look on the Bright Side of Life, named for the song he wrote for Life of Brian and which has since become the number one song played at funerals in the UK, he shares the highlights of his life and career with the kind of offbeat humour that has delighted his audiences for five decades. The year 2019 marks the fiftieth anniversary of The Pythons and Eric is marking the occasion with this hilarious memoir chock full of behind-the-scenes stories from a high-flying life featuring everyone from Princess Leia to Queen Elizabeth. Written and read by Eric Idle (p) Orion Publishing Group 2018
Visa hela texten

A remarkable and very entertaining memoir * The People's Friend * Ideal for Python lovers -- Sarah Hughes * i </i>Best book gifts to buy this Chrismas<i> * This tell-all from my comedy hero Eric Idle is brilliant, hilarious, touching, enlightening, filled with swashbuckling adventure, edge-of-your-seat suspense, heart-pounding romance, and contained several typos and one inaccurate fact about the Spanish-American war. I expected more out of Mr Idle's proofreading skills, quite frankly -- Paul Feig When you have a tour guide as engaging as Eric Idle, you'll gladly go wherever he takes you. The writer and comedian best known as a member of the British sketch troupe Monty Python has curated an intimate journey of what it was like to be a writer who suddenly found himself a massively famous actor. . . . It's also the kind of book you'll want to read twice-once when the genius of Python sketches are fresh in your memory, and once when those scenes have faded so you can be reminded how these comedy rebels shook up an art form that was due for a dose of surreal silliness * Washington Post * Idle is engaging company -- Roland White * Sunday Times * Inevitably, Eric Idle's memoir, Always Look on the Bright Side of Life, is no ordinary celebrity autobiography ... [Showbiz anecdotes] are combined with frank, fresh insights into five decades as part of Monty Python -- Hannah Shaddock * Radio Times * A hilarious, charming, book by this incredible, insufferable genius -- Steve Martin Charming ... A treasure trove of comedy insights * Rolling Stone * A thoroughly pleasurable read ... [It captures] the infectious glee with which the Monty Python troupe went about subverting the British establishment -- Alexander Larman * Observer * If I could go back in time and observe any comedian's journey, I think it would be a terrible waste of time travel. That said, I'd want to see just how Eric idle and a few friends changed comedy forever. This is the book that've been waiting for most of my life -- Conan O'Brien If you're Christmas shopping then Eric Idle's Always Look on the Bright Side of Life is the perfect present. Very funny and touching -- Matt Lucas I read Always Look on the Bright Side of Life from cover to cover. My next mission is to read what's between the covers. It's a joy to read Eric Idle's fully transparent personal stories of what got him to the present from birth. Any Monty Python lover or lover of honesty and the crafting of a hilarious comedian and musical genius will love this book. And love Eric as I do. Not to spoil-alert, but his stating that "Laughter is the best revenge" sums it up. Read every word of this book or I will hunt you down and read it to you. And you don't want me in your house -- Bob Saget The pleasingly jolly tone of what he calls his "sortabiography" captures the daft glee with which the he and his fellow Pythons lampooned British authority -- Fiona Sturges * Guardian </i>Best Books of 2018<i> * The Monty Python man embraced fame and became friends with George Harrison, David Bowie, Paul Simon and many others. This is an unashamedly starry autobiography, packed with hilarious name-dropping anecdotes -- Craig Brown * Mail on Sunday </i>Books of the Year<i> * On the last day, when the last human beings look out at the blackened cinders of their world, I can only hope that one of them will sing, "Some things in life are bad, they can really make you mad," and "Always Look on the Bright Side of Life" will ring out as humanity's final words. I loved this biography of a song and the man who made it, and the picture he paints of his life, his friends, his passions, five Pythons and a Beatle -- Neil Gaiman As funny, wicked, naughty, eye-popping and compulsively, joyously brilliant as the genius who wrote it -- Stephen Fry

Bloggat om Always Look on the Bright Side of Life

Eric Idle is a comedian, actor, author and singer-songwriter who found immediate fame on television with the sketch-comedy show Monty Python's Flying Circus. Following its success, the Pythons began making films that include Monty Python and the Holy Grail (1975), Monty Python's Life of Brian (1979) and The Meaning of Life (1983). Eric also wrote the award-winning musical Spamalot. He lives in Los Angeles.