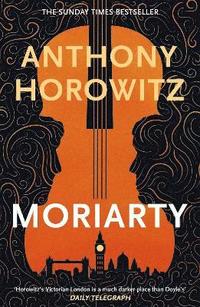 av Anthony Horowitz
Häftad Engelska, 2019-10-03
139
Köp
Spara som favorit
Finns även som
Visa alla 3 format & utgåvor
Sherlock Holmes is dead. Days after Holmes and his arch-enemy Moriarty fall to their doom at the Reichenbach Falls, Pinkerton agent Frederick Chase arrives from New York. The death of Moriarty has created a poisonous vacuum which has been swiftly filled by a fiendish new criminal mastermind. Ably assisted by Inspector Athelney Jones, a devoted student of Holmes's methods of investigation and deduction, Chase must hunt down this shadowy figure, a man much feared but seldom seen, a man determined to engulf London in a tide of murder and menace. The game is afoot . . .
Visa hela texten

Thrilling and compelling, with a stunning twist, this is written as if Conan Doyle were at Horowitz's shoulder, and is - in my view - the finest crime novel of the year. * DAILY MAIL * Is there nothing Anthony Horowitz touches that doesn't turn to gold? ...He captures Conan Doyle's narrative technique to perfection. Gory murders, honest thieves, brilliant disguises, breathless chases and red herrings abound * DAILY EXPRESS * A relentlessly fast-paced and entertaining read * SUNDAY TIMES * An unpredictable and twist-filled mystery from start to finish. But what do you expect from the man penning the next James Bond novel? * SHORTLIST * I hope it won't be the last of Horowitz' Holmes novels: should he publish another, I will be at the front of the queue. * SPECTATOR * Though Horowitz dishes up the gore and violence with relish, he also offers all the tropes one might expect from a Holmes yarn, including baffling coded messages, impossible murders and clever red herrings... plotting is just as brilliantly gnarly [as THE HOUSE OF SILK] but its tone more self-aware and laced with in-jokes. * FINANCIAL TIMES * "His new novel, Moriarty, begins with a bravura dissection of Doyle's story "The Final Problem" in which he points out all the discrepancies, loose ends and improbabilities of behaviour. The remainder of the book is partly an ingenious exercise in explaining them away. ...An often excruciatingly exciting pursuit, and there is much casual slaughter, with hints of torture; nothing gratuitous but, as in The House of Silk, Horowitz's Victorian London is a much darker place than Doyle's." * DAILY TELEGRAPH * "In this skilfully executed follow on, Horowitz takes up the Conan Doyle baton and creates a suitably stylish and twisty detective story." * SUNDAY MIRROR * THE HOUSE OF SILK, was very popular and a solid piece of work - well constructed, skilfully executed and persuasively tinged with that alluring sooty flavour of 1890s London. His second, MORIARTY, is much the same, but bolder in its ambitions * GUARDIAN * "The plot is gripping and the writing most readable. In fact I must make a confession: I would rather read Horowitz than his model, Arthur Conan Doyle." * LITERARY REVIEW * A no-nonsense writer Horowitz proceeds briskly and ladles out spills and thrills with aplomb. Yet, the novel is terribly serious too - the author evokes a sombre atmosphere early on and thereafter cannot seem to shake it. This is a worthy addition to the store of Holmes fan-fic - but not be quite the romp you expected. * IRISH INDEPENDENT * "Ultimately, Moriarty has its cake by playfully re-creating the Sherlock Holmes persona and eats it by poking gentle fun at his methodology - and, by extension, his enduring appeal...Anthony Horowitz may not be the most reverential of the many writers who have attempted to breathe new life into the legacy of Sherlock Holmes, but Moriarty proves that he is certainly one of the most entertaining". * IRISH TIMES * An exhilarating page-turner * SUNDAY POST * "Horowitz weaves this mystery together perfectly and his plot twists are unpredictable until the last." * NEWCASTLE JOURNAL * "A page-turner that is exhilarating and infuriating in equal measure." * EDINBURGH EVENING NEWS * "Fans of Arthur Conan Doyle's London will surely adore this fine addition to the literature, being fast-paced but at this same time fully stocked with proper 'fair-play' clues." * MORNING STAR * "Horowitz weaves a relentlessly thrilling tale which teases and delights by the turn of each page." * WESTERN MAIL * "[It's] like Holmes under the influence of Ripper Street and Peaky Blinders... Holmes fans will love the theorising and super-smart twists in this deft and showy work of fandom." * GLASGOW HERALD * "It's a seamless blend of old friends and new characters. Classic Holmes with a contemporary gloss." * SAGA * "A cunningly contriv

Anthony Horowitz is one of the UK's most prolific and successful writers. His novels The House of Silk and Moriarty were Sunday Times Top 10 bestsellers and sold in more than thirty-five countries around the world. His bestselling Alex Rider series for children has sold more than nineteen million copies worldwide. He is also the author of a James Bond novel, Trigger Mortis. As a TV screenwriter he created both Midsomer Murders and the BAFTA-winning Foyle's War; other TV work includes Poirot, the widely-acclaimed mini-series Collision and Injustice and most recently, New Blood for the BBC. Anthony sits on the board of the Old Vic and regularly contributes to a wide variety of national newspapers and magazines. In January 2014 he was awarded an OBE for services to literature. Anthony Horowitz lives in London. www.anthonyhorowitz.com @AnthonyHorowitz