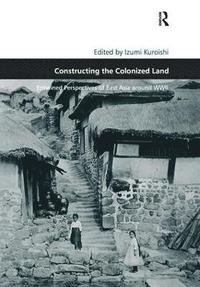 av Izumi Kuroishi
Inbunden Engelska, 2014-02-28
1499
Köp
Spara som favorit
Skickas inom 7-10 vardagar.
Fri frakt inom Sverige för privatpersoner.
Finns även som
Visa alla 3 format & utgåvor
Despite the precipitous rise of East Asia as a center of architectural production since the Second World War, informed studies remain lacking. The lacuna is particularly conspicuous in terms of regional, cross-national studies, documenting the close ties and parallels between China, Taiwan, Japan and Korea during this period. Examining colonized cities in East Asia, this book brings together a range of different perspectives across both space and time. European, Chinese, Taiwanese, Korean and Japanese discourses are examined, with a range of complementary and conflicting views on the design of urban and architectural forms; the political, institutional, religious and economical contexts of urban planning; the role played by various media; and the influence of various geographical, social and anthropological research methods. The diversity and plurality of these perspectives in this book provides an entwined architectural, urban and social history of East Asia, which offers insights into the cultural systems and the historical and spatial meanings of these colonized cities. It concludes that the difficulties in the historical study of East Asia's colonial cities do not so much indicate cultural difference as the potentiality for multiple readings of the past toward the future.
Visa hela texten

'This volume is useful for those interested in the intersections of colonialism, urbanism, regionalism, and modernity. The essays provide a new lens through which to think through space, the built environment, and contested heritages in East Asia. Izumi Kuroishi should be commended for seeing this volume to completion (post-earthquake and tsunami of 2011) and curating such a diverse array of papers that are insightful, interesting, and that open up new venues of inquiry and epistemologies into the ways in which we might consider colonial modernity and its impact on the urban fabric, infrastructure, and imaginings.' Equinox 'This book represents a major effort to delineate these complex, nuanced relationships by examining the production of architecture and urban space from the perspectives of different actors and institutions in the first half of the twentieth century.' Cecilia L. Chu, The University of Hong Kong

Izumi Kuroishi is at The Aoyama Gakuin University, Japan.