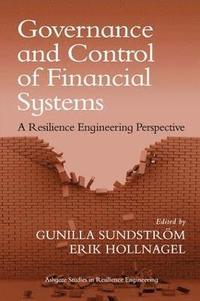 Governance and Control of Financial Systems

av Ms Gunilla Sundstrom, Professor Erik Hollnagel
Inbunden Engelska, 2011-09-28
1939
Köp
Spara som favorit
Skickas inom 10-15 vardagar.
Fri frakt inom Sverige för privatpersoner.
Finns även som
Visa alla 2 format & utgåvor
The recent financial crisis has made it paramount for the financial services industry to find new perspectives to look at their industry and, most importantly, to gain a better understanding of how the global financial system can be made less vulnerable and more resilient. The primary objective of this book is to illustrate how the safety science of Resilience Engineering can help to gain a better understanding of what the financial services system is and how to improve governance and control of financial services systems by leveraging some of its key concepts. Resilience is the intrinsic ability of a system to adjust its functioning prior to, during, or following changes and disturbances, so that it can sustain required operations under both expected and unexpected conditions. This definition is focused on the ability to function, rather than just to be impervious to failure, and thereby bridges the traditional conflict between productivity and safety. The core concept of the book is that the behaviour of the financial services system is the result of the tight couplings among the humans, organizations and technologies that are necessary to provide complex financial functions such as the transfer of economic resources. It is a consequence of this perspective that the risks associated with these systems cannot be understood without considering the nature of these tight couplings. Adopting this perspective, the book is designed to provide some answers to the following key questions about the financial crisis: - What actually happened? - Why and how did it happen? - Could something similar happen again? How can we see that in time and how can we control it? - How can sustainable recovery of the global financial system be established? How can its resilience be improved?
Visa hela texten

Gunilla SundstrAm is a global professional and consultant with a passion for Financial Services, Outsourcing/Offshoring and R&D. She has a proven leadership, execution and innovation track record in several areas including outsourcing/offshoring, decision support and analytics for operations, resilience engineering, governance and risk management. She has held leadership positions in a variety of industries including R & D, Financial Services and Global Sourcing. She currently holds the position of Head of Global Sourcing at Deutsche Bank. Gunilla SundstrAm has published more than 60 papers; holds two US Patents and has been awarded IEEE-Systems, Man and Cybernetics' outstanding contributions award. She currently serves on the editorial boards of the International Journal of Human Computer Interaction and the International Journal of Cognition, Technology & Work. She holds a Dr. Phil. degree from the University of Mannheim, Germany. Erik Hollnagel (Ph.D., psychology) is Professor at the University of Southern Denmark, Professor and Industrial Safety Chair at A0/00cole des Mines de Paris (France), and Professor Emeritus at University of LinkAping (Sweden). Since 1971 he has worked at universities, research centres, and industries in several countries and with problems from several domains, including nuclear power generation, aerospace and aviation, air traffic management, software engineering, healthcare, and land-based traffic. His professional interests include industrial safety, resilience engineering, accident investigation, cognitive systems engineering and cognitive ergonomics. He has published more than 250 papers and authored or edited 17 books, some of the most recent titles being The ETTO Principle (Ashgate, 2009), Resilience Engineering Perspectives: Preparation and Restoration (Ashgate, 2009), Resilience Engineering Perspectives: Remaining Sensitive to the Possibility of Failure (Ashgate, 2008), Resilience Engineering: Concepts and Precepts (Ashgate, 2006), and Barriers and Accident Prevention (Ashgate, 2004). Erik Hollnagel is Editor-in-chief of the series Ashgate Studies in Resilience Engineering and is on the editorial boards of nine international scientific journals.