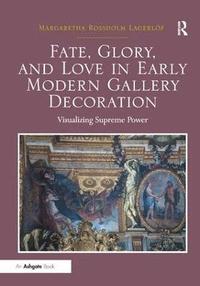 av Margaretha Rossholm Lagerlof
Inbunden Engelska, 2013-09-12
1559
Köp
Spara som favorit
Skickas inom 7-10 vardagar.
Fri frakt inom Sverige för privatpersoner.
Finns även som
Visa alla 1 format & utgåvor
Analysing the decorative programmes of the most opulent European palaces of the time, Margaretha Rossholm Lagerloef investigates how meaning was conveyed through display and visual effects. She explores the visual meaning inherent in the scheme of spatial relations; in effects of scale, perspective, lighting, figures' positions and postures; and in relations among image types. The analysis concerns the interrelations of various kinds of images in the ensembles; the relations between images and physical site; and the address to the beholder. Lagerloef considers the visual impact of the imagery in conjunction with 'readable' or symbolically 'coded' meanings; thus, the study does not merely subject these decorations to formalist aesthetic principles. She shows the visual meaning generally to sustain the verbal or readable messages, but often in subtle ways, extending or elaborating the meaning. Occasionally, the visual meaning comes forth as an undercurrent or complication, deviating from the proclaimed and symbolic meaning. Fate, Glory, and Love in Early Modern Gallery Decoration contributes to the body of scholarship on visual rhetoric and on how images 'act' out their messages.
Visa hela texten

'...Significant and original ... Lagerloef assembles here a group of monuments from France, Rome, and Stockholm, which allows for a synchronic interpretation and reading of significant issues of visuality and content across power regimes and the long time period of the Baroque style in Europe ... it is the first comprehensive examination in the history of art of these galleries, and as such makes an important scholarly contribution from which others may draw further conclusions.' Catherine M. Soussloff, University of British Columbia, Canada 'Four words featured in the title of this book-fate, glory, love, and power-are among the most salient concerns of the Baroque period. Margaretha Rossholn Lagerloef's book examines their manifestations in the spectacular cycles decorating the representative architectural spaces of sovereignty.' Sixteenth Century Journal 'Lagerloef ... brings these places to thought-provoking life.' Seventeenth-Century News 'Lagerloef deserves praise for being the first to study gallery decorations as a separate genre developing through time, with a focus on the establishment of traditions ...' Renaissance Quarterly