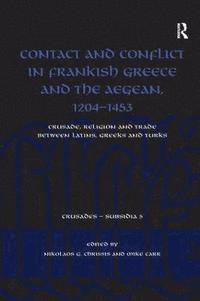 Contact and Conflict in Frankish Greece and the Aegean, 1204-1453

Crusade, Religion and Trade between Latins, Greeks and Turks

av Dr Nikolaos G Chrissis, Mike Carr
Inbunden Engelska, 2014-02-21
1499
Köp
Spara som favorit
Skickas inom 5-8 vardagar.
Fri frakt inom Sverige för privatpersoner.
Finns även som
Visa alla 3 format & utgåvor
The conquest of Constantinople by the Fourth Crusade shattered irreversibly the political and cultural unity of the Byzantine world in the Greek peninsula, the Aegean and western Asia Minor. Between the disintegration of the Byzantine Empire after 1204 and the consolidation of Ottoman power in the fifteenth century, the area was a complex political, ethnic and religious mosaic, made up of Frankish lordships, Italian colonies, Turkish beyliks, as well as a number of states that professed to be the continuators of the Byzantine imperial tradition. This volume brings together western medievalists, Byzantinists and Ottomanists, combining recent research in the relevant fields in order to provide a holistic interpretation of this world of extreme fragmentation. Eight stimulating papers explore various factors that defined contact and conflict between Orthodox Greeks, Catholic Latins and Muslim Turks, highlighting common themes that run through this period and evaluating the changes that occurred over time. Particular emphasis is given on the crusades and the way they affected interaction in the area. Although the impact of the crusades on Byzantine history leading up to 1204 has been extensively examined in the past, there has been little research on the way crusading was implemented in Greece and the Aegean after that point. Far from being limited to crusading per se, however, the papers put it into its wider context and examine other aspects of contact, such as trade, interfaith relations, and geographical exploration.
Visa hela texten

'... this edited volume provides a wide range of topics in essays that go into great and fascinating scholarly depth. The book makes a solid attempt at getting historians from a variety of different historical periods to share their scholarship and work to expand their fields by making interesting cross-cultural comparisons in their studies. In this regard, Contact and Conflict in Frankish Greece and the Aegean is certainly a step in the right direction.' Hortulus

Bloggat om Contact and Conflict in Frankish Greece a...