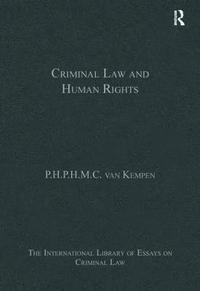 av P H P H M C Van Kempen
Inbunden Engelska, 2014-07-09
2719
Köp
Spara som favorit
Kan tyvärr inte längre levereras innan julafton.
The significance of fundamental individual rights to substantive criminal law, criminal procedure law and sentencing law is undeniable for anyone who is familiar with the criminal justice system. The fourteen essays selected for this volume portray and discuss the meaning and rationale of those human rights that are most relevant to that system. They have been chosen for their high quality, timeless approach and general attention to issues that are of universal interest and thus not too closely related to the technicalities of a specific criminal justice system. In combination with the introduction to this volume, the essays cover almost the entire criminal justice system and offer a general overview as well as an in-depth examination of criminal law and human rights. As a result, this volume is essential for researchers, lecturers and students concerned with the tensions and harmonies between the values the criminal justice system and human rights respectively serve.
Visa hela texten

Professor Dr. P.H.P.H.M.C. van Kempen is Professor of Criminal Law and Criminal Procedure Law, and Chair of the Department of Criminal Law, Criminal Procedure Law and Criminology at Radboud University, Nijmegen, The Netherlands. He is Secretary-General of the International Penal and Penitentiary Foundation (IPPF) and part-time Justice (Judge) at the Court of Appeals, 's-Hertogenbosch, The Netherlands.