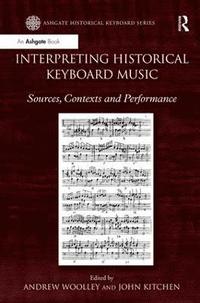 av Dr Andrew Woolley, John Kitchen
Inbunden Engelska, 2013-10-28
1819
Köp
Spara som favorit
Skickas inom 10-15 vardagar.
Fri frakt inom Sverige för privatpersoner.
Finns även som
Visa alla 4 format & utgåvor
Research in the field of keyboard studies, especially when intimately connected with issues of performance, is often concerned with the immediate working environments and practices of musicians of the past. An important pedagogical tool, the keyboard has served as the 'workbench' of countless musicians over the centuries. In the process it has shaped the ways in which many historical musicians achieved their aspirations and went about meeting creative challenges. In recent decades interest has turned towards a contextualized understanding of creative processes in music, and keyboard studies appears well placed to contribute to the exploration of this wider concern. The nineteen essays collected here encompass the range of research in the field, bringing together contributions from performers, organologists and music historians. Questions relevant to issues of creative practice in various historical contexts, and of interpretative issues faced today, form a guiding thread. Its scope is wide-ranging, with contributions covering the mid-sixteenth to early twentieth century. It is also inclusive, encompassing the diverse range of approaches to the field of contemporary keyboard studies. Collectively the essays form a survey of the ways in which the study of keyboard performance can enrich our understanding of musical life in a given period.
Visa hela texten

' ... there is much interesting scholarship here, and many important subjects visited, ... this is certainly an important contribution to our understanding of keyboard music through the centuries, and should be welcomed as such.' Douglas Hollick, The Consort 'Ashgate has served the present editors and contributors well in a major book produced to a high standard.' The Musical Times 'There is plenty written on the subject of keyboard interpretation, but the present collection, with it breadth of materials and scope, makes a unique contribution to a contextualized understanding of the creative processes in keyboard music, and ideas that intertwined with these processes. ... this collection shows the extent to which discourses on keyboard interpretation have matured and diversified over the years. Woolley and Kitchen are to be commended for their outstanding editorial work and for performing the Herculean task of providing coherence to the collection .... The book will appeal to a wide readership, particularly to those who are concerned with the broader issues of keyboard interpretation. As the inaugural volume of the Ashgate Historical Keyboard Series, this book sets an extremely high standard.' Music and Letters 'This book is intended for scholars of keyboard music interested in music of the sixteenth to the nineteenth centuries. ... If Ashgate's series can generate some momentum this book will be the beginning of an important initiative in keyboard music studies.' David Rowland, Ad Parnassum

Andrew Woolley is a musicologist and performer with research interests in music of the seventeenth and eighteenth centuries, performance practice, and keyboard music. To date he has published several articles on British and Italian music of the late seventeenth and eighteenth centuries. John Kitchen is a Senior Lecturer in Music, Organist to the University of Edinburgh, and Edinburgh City Organist. He also directs both University and church choirs, gives many solo organ and harpsichord recitals, and is in demand as a continuo player, accompanist, lecturer, writer, adjudicator and reviewer and recording artist.