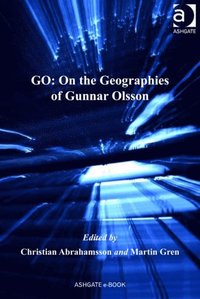 GO: On the Geographies of Gunnar Olsson (e-bok)

av Dr Martin Gren, Mr Christian Abrahamsson
E-bok (EPUB - DRM), Engelska, 2012-11-28
1679
Ladda ned
Spara som favorit
Laddas ned direkt
Läs i vår app för iPhone, iPad och Android
Finns även som
Visa alla 4 format & utgåvor
Since the early 1960s, the internationally acclaimed and highly distinguished Swedish geographer Gunnar Olsson has made substantial contributions to his own discipline. In addition, because of the transgressive nature of his work and writing, which often borders to art and philosophy, his ideas and approaches have reached a wider audience of those interested in the history and geography of ideas, culture and human reasoning.Olssons recent masterpiece, Abysmal, is a minimalist guide to the territory of Western culture. In it, he investigates how cartographical reason enables people to think about and navigate the abstract world of invisible human relations, in much the same way as they are able to study and traverse the physical Earth by using maps and mapping.This book presents a comprehensive introduction to, and overview of, the entire range of Olssons geography from the early days of spatial science to his contemporary engagement with, and critique of, cartographical reasoning. It includes selected samples of Olssons own writings, including rarities, together with a consolidated bibliography of his publications.It also contains critical engagements from leading scholars such as Michael Dear, Michael Watts, Chris Philo and Marcus Doel, with Olssons geography, from a variety of perspectives, which are particularly valuable to those readers who already know his work.It is structured and written in a way that makes Olssons geography accessible to a wide readership, including those who are not already familiar with Olssons work.
Visa hela texten

Bloggat om GO: On the Geographies of Gunnar Olsson