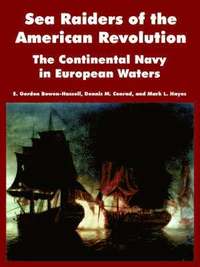 Sea Raiders of the American Revolution

The Continental Navy in European Waters

av E Gordon Bowen-Hassell, Dennis M Conrad, Mark L Hayes
Häftad Engelska, 2004-12-01
329
Köp
Spara som favorit
Skickas inom 10-15 vardagar.
Fri frakt inom Sverige för privatpersoner.
The Navy of the United States, like the nation itself, was born in the midst of the bloody conflict for independence known as the American Revolution. The Continental Navy, as it was called then, shaped and was shaped by this difficult struggle for freedom that lasted from 1775 to 1783. During the war, the sailors of the young navy, seamen and officers alike, established the proud traditions of honor, courage, and commitment shared by today's servicemen in the United States Navy. It is important for the American people, especially those who wear the uniform, to understand the significant role that the Continental Navy played in the nation's beginnings.

This book is about three captains of the Continental Navy: Lambert Wickes, Gustavus Conyngham, and John Paul Jones. In recounting the stories of their lives and examining the roles they played in the Navy's early years, it highlights the difficult circumstances that each man faced operating in seas dominated by the British Navy and emphasizes that the outcome of the American War for Independence was far from certain. The book also illustrates the humanity of these Revolutionary War heroes, revealing their weaknesses as well as their strengths. They exhibited frustration, pettiness, and egotism as well as courage, initiative, and sound judgment. Like naval leaders today, these Continental Navy officers faced tough choices and were forced to live with the consequences, for good or ill. Their lives and choices had an important influence on the course of the war and on the character of the naval service.
Visa hela texten