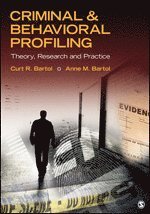 Criminal and Behavioral Profiling, written by well-established authors Curt and Anne Bartol, presents a realistic and empirically-based look at the theory, research, and practice of modern criminal profiling, or, as it's more professionally termed, behavioural analysis or behavioural investigative analysis. Designed for use in a variety of criminal justice and psychology courses, the book delves into the process of identifying distinctive behavioural tendencies, geographical locations, demographic, and biographical descriptors of offenders, and personality traits, based on characteristics of the crime. Timely literature and case studies from the rapidly growing international research in criminal profiling help students understand the best practices, major pitfalls, and psychological concepts that are key to this process.
Visa hela texten

Curt R. Bartol was a college professor for more than 30 years, teaching a wide variety of both undergraduate and graduate courses, including Biopsychology, Criminal Behavior, Juvenile Delinquency, Introduction to Forensic Psychology, Social Psychology, Profiling, and Psychology and Law. He earned his PhD in personality/social psychology from Northern Illinois University in 1972. He studied political science and law at the University of Wisconsin-Madison under a fellowship from the National Institute for the Humanities (NIH). He was instrumental in creating and launching Castleton State Colleges graduate program in forensic psychology and served as its director for 6 years. As a licensed clinical psychologist, he has been a consulting police psychologist to local, municipal, state, and federal law enforcement agencies for over 30 years. In addition to Introduction to Forensic Psychology, he has coauthored Criminal Behavior: A Psychosocial Approach (now in its 11th ed.), Juvenile Delinquency and Antisocial Behavior: A Developmental Perspective (3rd ed.), Criminal and Behavioral Profiling, and Psychology and Law: Theory, Research, and Application (3rd ed.). He served as editor of SAGEs Criminal Justice and Behavior: An International Journal, for 17 years. He also co-edited Current Perspectives in Forensic Psychology and Criminal Behavior (3rd ed.). Anne M. Bartol earned an MA and a PhD in criminal justice from State University of New York at Albany. She also holds an MA in journalism from the University of WisconsinMadison. She taught criminal justice, sociology, and journalism courses over a 20-year college teaching career and has worked as a journalist and a social worker in child and adolescent protective services. In addition to Introduction to Forensic Psychology, she has coauthored Juvenile Delinquency: A Systems Approach; Delinquency and Justice: A Psychosocial Approach; Psychology and Law: Theory, Research, and Application; Criminal Behavior; and Criminal and Behavioral Profiling. She co-edited Current Perspectives, has served as book review editor and managing editor of Criminal Justice and Behavior and has published articles on women and criminal justice, rural courts, and the history of forensic psychology.