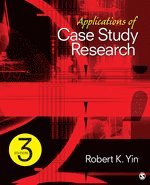 New to This Edition:

- Expanded from 10 to 15 chapters, and from 16 to 21 case study applications, the book provides many more examples of the case study method

- Contains six entirely new chapters, all emphasizing single-case and simpler applications, and including an introductory chapter which serves as a refresher on the case study method

- Provides a new feature called inside stories, which are linked to suggested classroom exercises

This text brings the theory of case study research to life by presenting real-life illustrations of research techniques in practice. Professionals and advanced students can learn a lot by modeling their own research strategies on these examples.

Robert K. Yin is President of COSMOS Corporation, an applied research and social science firm.  Over the years, COSMOS has successfully completed hundreds of projects for federal agencies, state and local agencies, and private foundations.

Outside of COSMOS, Dr. Yin has assisted numerous other research groups, helping to train their field teams or to design research studies. The most recent such engagements have been with The World Bank, the Division of Special Education and disAbility Research at George Mason University, the Department of Nursing Research and Quality Outcomes at the Childrens National Health System (Washington, DC), and the School of Education, Southern New Hampshire University.