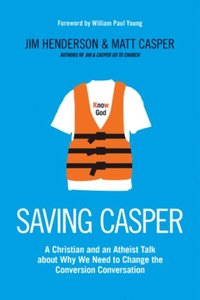 av Jim Henderson, Matt Casper, William Paul Young
E-bok (EPUB - DRM), Engelska, 2013-09-20
176
Ladda ned
Spara som favorit
Ladda ned och läs i en e-boksläsare. Tips på appar
The authors of the popular Jim and Casper Go to Church are back! An unlikely friendship began when former pastor Jim Henderson brought atheist Matt Casper with him to visit a series of churches and give his honest feedback on the services. Since then, Casper has spent a lot of time deeply engaging with Jim and other Christians. And the burning question on everyone's minds is whether Casper has been saved. In Saving Casper, Jim and Casper engage in a new conversation about that question. Most Christians have friends like Casper-people who've heard the gospel but still say no-so what happens next? Jim and Casper reveal the surprising answers to questions like: What can an atheist teach us about how to share God with those who don't believe? What have well-meaning Christians said to Casper that has helped-or hurt-their cause? What, if anything, might bring Casper and other nonbelievers to faith . . . and why does Casper say he's closer to God now than ever before? Saving Casper is a groundbreaking, game-changing look at evangelism and the &quoteconversion conversation.&quote
Visa hela texten