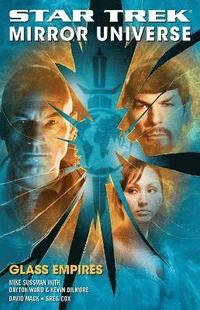 av David MacK, Greg Cox, Mike Sussman, Dayton Ward, Kevin Dilmore
Häftad Engelska, 2007-03-01
289
Köp
Spara som favorit
Finns även som
Visa alla 1 format & utgåvor
Romemeets Star Trekin this alternate universe depicting the dark side of everyone's favourite characters. RESTORATION reveals the rise of Empress Sato. Aided by the power of a starship from the future, Sato looks to cement her control over the Terran Empire by forcing the Andorians under her control while simultaneously using the Terran and Andorian forces to crush the Vulcan rebellion. THE SORROWS OF THE EMPIRE shows Spock taking control of the Terran Empire and putting a plan into motion that will bring the Empire to an end. But it seems that Spock has miscalculated, as a harsher force emerges to take over and enslave all humans. In THE WORST OF ALL WORLDS, after a hundred years of domination by the Cardassians and the Klingons, humans struggle to survive. A man known as Jean-Luc Picard agrees to take an elderly, doddering scientist, Noonien Soong, to a planet where he's heard there is a human-machine hybrid...
Visa hela texten

David Mack is the award-winning and New York Times bestselling author of more than thirty novels of science fiction, fantasy, and adventure, including the Star Trek Destiny and Cold Equations trilogies. His writing credits span several media, including television (for episodes of Star Trek: Deep Space Nine), film, short fiction, and comic books. He resides in New York City. Greg Cox is the New York Times bestselling author of numerous Star Trek novels and short stories. He has also written the official movie novelizations of War for the Planet of the Apes, Godzilla, Man of Steel, The Dark Knight Rises, Daredevil, Ghost Rider, and the first three Underworld movies, as well as books and stories based on such popular series as Alias, Buffy the Vampire Slayer, CSI, Farscape, The 4400, Leverage, The Librarians, Roswell, Terminator, Warehouse 13, Xena: Warrior Princess, and Zorro. He has received three Scribe Awards from the International Association of Media Tie-In Writers, as well as the Faust Award for Life Achievement. He lives in Lancaster, Pennsylvania. Visit him at GregCox-Author.com. Dayton Ward is the New York Times bestselling author or coauthor of nearly forty novels and novellas, often working with his best friend, Kevin Dilmore. His short fiction has appeared in more than twenty anthologies, and he's written for magazines such as NCO Journal, Kansas City Voices, Famous Monsters of Filmland, Star Trek, and Star Trek Communicator, as well as the websites Tor.com, StarTrek.com, and Syfy.com. A native of Tampa, Florida, he currently lives in Kansas City, Missouri with his wife and two daughters. Visit him on the web at DaytonWard.com. Kevin Dilmore has teamed with author Dayton Ward for fifteen years on novels, shorter fiction, and other writings within and outside the Star Trek universe. His short stories have appeared in anthologies including Native Lands by Crazy 8 Press. By day, Kevin works as a senior writer for Hallmark Cards in Kansas City, Missouri. A graduate of the University of Kansas, Kevin lives in Overland Park, Kansas.