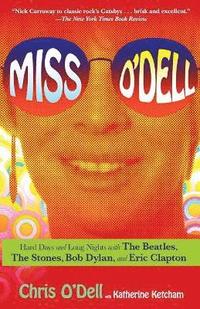 Hard Days and Long Nights with The Beatles, The Stones, Bob Dylan and Eric Clapton

av Chris O'Dell, Katherine Ketcham
Häftad Engelska, 2010-08-19
259
Köp
Spara som favorit
Skickas inom 5-8 vardagar.
Fri frakt inom Sverige för privatpersoner.
Finns även som
Visa alla 1 format & utgåvor
Chris O'Dell has packed a lot in a small amount of time and is probably surprised that she made as far as she has, considering the life she have lived. Hanging around with the Beatles, Eric Clapton and the Rolling Stones and managing tours for George Harrison, Bob Dylan, Santana, Earth, Wind & Fire and Crosby, Stills, Nash and Young. In the early 1980s she worked with Led Zeppelin, Phil Collins, Fleetwood Mac, Queen, The Grateful Dead, and The Band. During all those years, drugs were everywhere. She smoked marijuana, popped black bombers, dropped LSD, and drank endless Scotch and cokes (the Beatles' favourite drink). Getting deep into cocaine while touring with the Stones by the end of the tour in New York she was shooting up the drug. Now sixty years old and with a full life she reflects back on her past.
Visa hela texten

"Nick Carraway to classic rock's Gatsbys...brisk and excellent." --The New York Times Book Review "One of the most rollicking and enjoyable classic rock memoirs of recent years...don't mistakenly file this book under Groupie Lit." --Houston Press "If there were such a thing as a female Forrest Gump of rock 'n' roll, Chris O'Dell would be it." --High Times

From 1968 to 1984, Chris O'Dell worked in the music world as an assistant and tour manager for the most influential musicians of that era. She has appeared on television, radio, and print media relating to her stories of her years with The Beatles and The Stones. She appears in a number of books written about the various groups she worked for including I, Me Mine by George Harrison; Rolling Thunder Logbook by Sam Shepard; Wonderful Tonight by Patti Boyd, and Clapton by Eric Clapton. Currently, she is a Licensed Professional Counselor and Licensed Substance Abuse Counselor. She has a twenty-two year old son and lives in Tucson, Arizona. Katherine Ketcham is the coauthor of 13 books, including the New York Times bestseller Broken: My Story of Addiction and Redemption by William Moyers and the bestselling classics Under the Influence with James Milam and The Spirituality of Imperfection with Ernest Kurtz. More than 1.4 million copies of her books are in print, and her books have been translated into 13 languages. She has three adult children and lives in Walla Walla, Washington with her husband.