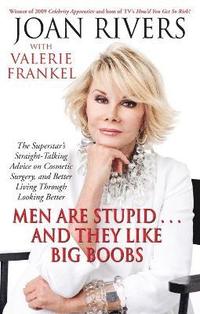 A Woman's Guide to Beauty Through Plastic Surgery

av Joan Rivers, Valerie Frankel
Häftad Engelska, 2010-02-18
227
Köp
Spara som favorit
Finns även som
Visa alla 2 format & utgåvor
Delivered with Joan's signature sense of humour, Men Are Stupid...And They Like Big Boobsis a no-nonsense, common-sense, "can-we-talk" guide to the ins and outs of such increasingly common beauty procedures as botox injections, chemical peels, microdermabrasion, liposuction, rhinoplasty, eye lifts, breast augmentation-and much more. Chapters include: Peels and Fillers, Sucks to Be You, Eyes Wide Open, Care Enough to Do Your Very, Very Breast, Less Where You Don't Want It, More Where You Do, and Bringing Up the Rear. Filled with practical wisdom and plenty of wisecracks, this fun and inspirational guide is for every woman who wants to look and feel gorgeous.
Visa hela texten

Joan Rivers was an American comedian, actress, talk show host, businesswoman, and celebrity. She was known for her brash manner and loud, raspy voice with a heavy metropolitan New York accent. Rivers was the National Chairwoman of the Cystic Fibrosis Foundation and is a board member of God's Love We Deliver. Like the ground-breaking Phyllis Diller, Rivers's act relied heavily on poking fun at herself. She died in 2014. Valerie Frankel had published fourteen novels, four non-fiction titles, and one memoir. Her titles include: Thin Is The New Happy, The Best You'll Ever Have, Fringe Girl, Hex and the Single Girl, The Accidental Virgin, and Smart Vs. Pretty.