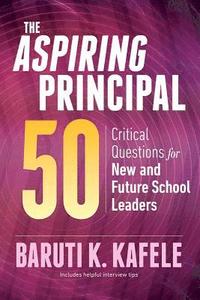 av Baruti K Kafele
Häftad Engelska, 2019-05-30
219
Köp
Spara som favorit
Skickas inom 5-8 vardagar.
Fri frakt inom Sverige för privatpersoner.
So, you want to be a principal? Are you a new principal who could benefit from the wisdom of a successful four-time principal? Could you use help preparing for a school administrator job interview? Then this is the book for you. In The Aspiring Principal 50, school leadership expert Baruti Kafele presents reflective questions aimed at assisting both new and aspiring school leaders as they work to become effective school leaders and consider making a leap to a leadership position, respectively. This book will help aspiring principals determine whether ""The Principal"" is truly who they want to be and help new principals grow and thrive in the principalship. Additionally, the book contains an entire chapter devoted to preparing for the school administrator job interview. Kafele infuses the book from beginning to end with succinct advice on everything from remaining focused on the principal's number one priority-student achievement-to addressing maintenance concerns, managing budget allocations, and ensuring that the school's website puts the school in the best possible light. With The Aspiring Principal 50, you can increase the likelihood that your tenure as principal will be a successful, beneficial, and healthful one.
Visa hela texten

Baruti K. Kafele, a highly regarded urban educator in New Jersey for more than 20 years, has distinguished himself as a master teacher and a transformational school leader. As an elementary school teacher in East Orange, New Jersey, he was named East Orange School District and Essex County Public Schools Teacher of the Year, and he was a finalist for New Jersey State Teacher of the Year. As a middle and high school principal, he led the transformation of four different New Jersey urban schools, including Newark Tech, which went from a low-performing school in need of improvement to national recognition, and which was recognized by U.S. News and World Report as one of America's best high schools. Kafele is one of the most sought-after school leadership experts in North America. He is the author of eight books, including his five ASCD best-sellers-Is My School a Better School BECAUSE I Lead It?, The Teacher 50, The Principal 50, Closing the Attitude Gap, and Motivating Black Males to Achieve in School & in Life. He is the recipient of more than 150 educational, professional, and community awards, including the prestigious Milken National Educator Award and the National Alliance of Black School Educators Hall of Fame Award. He was inducted into the East Orange, New Jersey Hall of Fame, and the City of Dickinson, Texas, proclaimed February 8, 1998, Baruti Kafele Day.