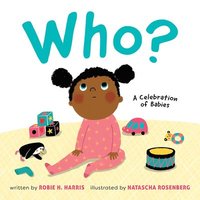 A Celebration of Babies

av Robie H Harris
Kartonnage Engelska, 2018-06-05
65
Köp
Spara som favorit
Finns även som
Visa alla 1 format & utgåvor
Who's that? A BABY! Sweet Baby! Nice Baby! That's who! Who? explores the relationships babies form with the people and things they love the most. The text's repetitive verse and melodic voice will captivate babies and toddlers and draw them into the sounds and images of the book.
Visa hela texten

"Care has been taken to show different ethnicities and cultures in the illustrations and the white page and clear drawings make it easy for little ones to look at. A super simple call-and-response style text should encourage young readers to read along and join in." -- BookTrust

Robie H. Harris is the author of several picture books, including MAYBE A BEAR ATE IT! and WHAT'S SO YUMMY? She lives in New York City. Natascha Rosenberg started off studying Law but knew all along that it was not her true calling. In 1998 she started doing what felt right and became a freelance illustrator. You can find her work mainly in children's books but also in magazines, CD Covers, exhibits and even on toys. She was chosen as the Selected Illustrator in the 2014 Bologna Children's Bookfair.