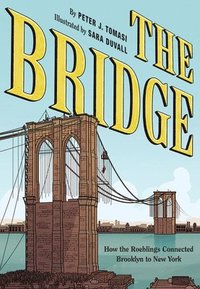 How the Roeblings Connected Brooklyn to New York

av Peter Tomasi
Inbunden Engelska, 2018-04-01
259
Köp
Spara som favorit
Skickas inom 3-6 vardagar.
Fri frakt inom Sverige för privatpersoner.
Finns även som
Visa alla 1 format & utgåvor
More than 130 years after its completion, the Brooklyn Bridge remains one of the most extraordinary landmarks and symbols of Brooklyn and New York City-and the story behind this architectural marvel is just as extraordinary. The Brooklyn Bridge was originally designed by John Augustus Roebling, but it was his son, Washington, and his daughter-in-law, Emily, who oversaw the bridge's construction. As work on the bridge went on, Washington developed caisson disease, leaving him bedridden for the majority of the bridge's 14-year construction. Washington's wife, Emily Roebling, took his place running the work site, deftly assuming the role of chief engineer, supervising the project and overseeing the workers, contractors, a hostile press, and greedy city politicians-an unusual position for a woman to take on at the time. In this inspiring graphic novel, author Peter J. Tomasi and illustrator Sara Duvall show the building of the Brooklyn Bridge as it has never been seen before, and the marriage of the Roeblings-based on intellectual equality and mutual support-that made the construction of this iconic structure possible.
Visa hela texten

""The Bridge" meticulously depicts the enormity of the project, from meeting room intrigues to the sometimes perilous construction site... Mr. Tomasi and Ms. DuVall capture many historic moments." The New York Times "The Brooklyn Bridge is as much a feat of engineering as it is a familiar sight, as this graphic novel by Peter J. Tomasi and illustrator Sara Duvall reminds us." New York Magazine online "Rather than being a story of a singular genius overcoming adversity, the book is a paean to collaboration. Iconic structures often have fascinating stories behind them, but rarely do the tellings emphasize the human as this one does." Publishers Weekly "...fast-paced and deeply moving..." The Village Voice online "The fascinating, tragic, and uplifting story of the Brooklyn Bridge's creation..." Comic Book Resources "Crisply drawn and tautly scripted. it could be the illustrated screenplay for an HBO miniseries or even Spielberg's next awards-botherer." Total Film "...Peter J Tomasi and Sara DuVall's graphic novel The Bridge tells that tale with energy and verve. [...] This is a lively, pleasing account of one of the "quintessential American stories that no one really seems to know about", as Tomasi writes in his preface. If we talk about building bridges rather than walls, why not read about the men - and the remarkable woman - who built one of the greatest bridges of them all?" New Statesman "He's written a book that spans the years!" The Brooklyn Paper and The Brooklyn Daily "To be honest, there are not enough comics and graphic novels about civil engineering for my liking. So many comics and books and films are created about how things fall down (mostly because Thanos or a giant wolf or Godzilla are in town), yet there is just as much drama in the putting them up in the first place. [...] The result is an entertaining and readable graphic novel that lauds construction not destruction. And that, Tomasi suggests in his introduction, is something we need more of right now." The Herald "An iconic landmark beloved by many for its panoramic views of the New York skyline...This beautifully rendered graphic novel, illustrated by Sara Duvall, details how this engineering marvel was brought to fruition." Shelf Awareness for Readers

Peter J. Tomasi is a former editor at DC Comics and a New York Times bestselling author known for his work on the characters Green Lantern, Batman, Robin, Superman, Wonder Woman, and various series including Nightwing, The Outsiders, and Batman: Arkham Knight. He lives in New York City. Sara DuVall is an Eisner-nominated Latina comics artist based in the Seattle area. A cartooning graduate from the School of Visual Arts, Sara is the artist for Deja Brew and several queer- and PoC-centric anthology comics. She lives in Renton, Washington.