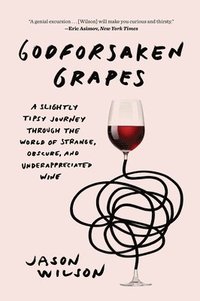 A Slightly Tipsy Journey through the World of Strange, Obscure, and Underappreciated Wine

av Jason Wilson
Häftad Engelska, 2019-04-09
119
Köp
Spara som favorit
Skickas inom 7-10 vardagar.
Gratis frakt inom Sverige över 159 kr för privatpersoner.
Finns även som
Visa alla 2 format & utgåvor
There are nearly 1,400 known varieties of wine grapes in the world-from altesse to zierfandler-but 80 percent of the wine we drink is made from only 20 grapes. In Godforsaken Grapes, Jason Wilson looks at how that came to be and embarks on a journey to discover what we miss. Stemming from his own growing obsession, Wilson moves far beyond the "noble grapes," hunting down obscure and underappreciated wines from Switzerland, Austria, Portugal, France, Italy, the United States, and beyond. In the process, he looks at why these wines fell out of favor (or never gained it in the first place), what it means to be obscure, and how geopolitics, economics, and fashion have changed what we drink. A combination of travel memoir and epicurean adventure, Godforsaken Grapes is an entertaining love letter to wine.
Visa hela texten

Jason Wilson is the author of Boozehound: On the Trail of the Rare, the Obscure, and the Overrated in Spirits, and the series editor of The Best American Travel Writing since its inception in 2000. A regular contributor to the Washington Post, Wilson wrote an award-winning drinks column for years. Wilson has also been beer columnist for the San Francisco Chronicle, dining critic for the Philadelphia Daily News and Philadelphia Magazine, and has written for the New York Times, NewYorker.com, AFAR, National Geographic Traveler, and many other magazines and newspapers.